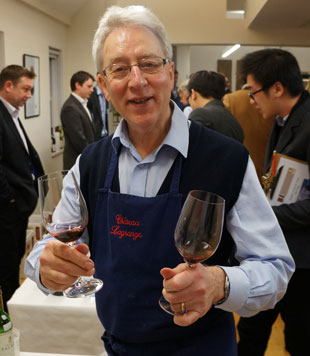 2003 was an extremely atypical year not just in Bordeaux, but across most of Europe. You may recall the scorching temperatures – a good fortnight of 30+C in the UK and pushing 45 in certain parts of the Med. For winegrowing regions, this causes serious problems...

The heat was relentless through June, July and August leading to red grapes that were small, with a high proportion of skin to juice, and which were high in sugar and low in acidity. In many soils (particularly the lighter, gravely /sandy ones) tannins that were less fully ripe than the grapes’ sugar and acid levels implied. Water was not a significant issue because water reserves were adequate; but the cooler, more water retentive clay and limestone soils appear to have allowed their grapes to ripen more evenly and harmoniously. Of the grape varieties Merlot suffered more from the heat than the Cabernets. Cabernet Sauvignon had longer to mature, under perfect conditions, and ripened more completely and evenly in the northern part of the Médoc especially - but even in the Cabernets phenolic ripeness varied enormously up and down the Left Bank.

Torrid conditions meant that sugar ripeness was easy to achieve but lowish acidity was inevitable as a result of the heat; adding acid, not something the Bordelais are used to, often made for a bright, edgy finish. Another consequence was an abundance of grippy tannin because the phenolics in the grapes simply didn’t have sufficient time to ripen fully in the extreme conditions.

So expectations were muted and, in many cases, the wines were simply disappointing. Fruit ripeness was on occasion counteracted by a greenness – the result of a lack of true phenolic ripeness – other wines' tannins were rough and acidities low, making for short finishes. Overall, one of the overriding characteristics was a lack of complexity which, at the price, one might be prepared to expect.

However for pure, in-the-glass drinking pleasure, many of these wines take some beating. In the main they are plush, lush, ripe, generous and drinking incredibly well now. On top of that there are some real stars – primarily Left Bank, Pauillac and St Estephe wines – which will drink beautifully for the next 10 years at least. Interestingly, value often appears at the £350-£600 per case level, with wines like Langoa Barton and Domaine de Chevailer massively overreaching their supposedly ‘humble’ categorisation.

IN A LARGE NUTSHELL:

Not a Great Vintage

The Best are Drinkers’ Wines in the Most Positive Sense

[Join the conversation! Tweet us your thoughts on the 2003 vintage on @bordeauxindex.]