“I think we might have too much Leroy and DRC…” 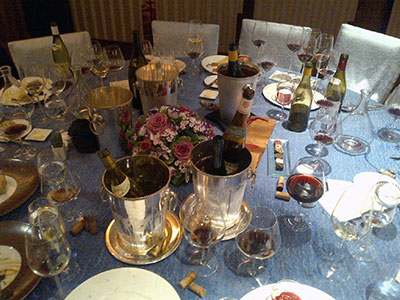 Never before has such a statement encapsulated all you need to know about the fine wine scene in HK. Extravagant, bordering on excessive but always brilliantly fun, there are very few islands on our dear planet that can compete in sheer hedonism with a HK Burgundy soiree in full swing…except maybe for Mackinac (google it). Take that Ibiza!

After much arm twisting and campaigning, Mike Wu was persuaded to throw another La Paulee (HK style) following last year’s wonderful event. And so 40-50 of Hong Kong’s wine collectors and professionals armed to the teeth with some of the finest Burgs known to man, gathered once again to share some fantastic wines with one another and pay homage to the humble grape varieties known as Chardonnay and Pinot Noir.

The list of wines, so generously poured on the night, at times bordered on the ridiculous both in their pedigree and in sheer numbers. At one point glasses including; ’72 Clos de la Roche (Ponsot), ’88 Richebourg (DRC), ’76 La Tache (from magnum) and ’90 RSV (Leroy), jostled for space with my dinner plate. Indeed, towards the end of the night I found myself acting as bar tender, keeping guests topped up with various ‘leftovers.’ Deciding to keep things simple I opted for a jero of ’83 La Tache as the house pour at my makeshift pub. When in Rome and all that.

At such events it’s only natural to become drawn to and dazzled by the biggest names from the biggest vintages, but nearly always it is something leftfield that leaves the deepest impression on me. An off-vintage. A lesser-know grower. Something completely random perhaps.

You will have gathered already that at this particular dinner there were no lesser-known growers to be found but of the three wines that stood out the most for me, two were from off-vintages and the third had no right to be at a Burgundy dinner at all.

The Offies
1981 Meursault Perrieres, Lafon – Before this dinner and this bottle came my way, the number of great wines from my birth year stood at three. Albeit a handful of half-decent Pomerols and some CDP’s, 1981 was by and large awful in France. ’81 was an especially stinker of a year for Burgs. That said, I’m a massive fan of Lafon, since Dominique took over in 1982 he has worked wonders at this estate, where like many of the great producers, he rarely, if ever, makes bad wines …Beautiful golden colour, showing plenty of maturity. Lovely butterscotch and baked apple aromas but in no way over the hill or over the top. Great balance and that classic Lafon precision and strictness on the palate (before it became classic Lafon). Almost makes a nonsense of the notion of good and bad vintages. Thanks DW for bringing this!

1983 Bonnes Mares, Roumier – Another off-vintage but sometimes such is the power and burliness of Bonnes Mares, the lighter or more forward years can appeal. This is almost Rayas-like on the nose, beef blood, tar, forest floor, very animal. Explosive on the palate but showing plenty of maturity and some of those wilder Rhone-esque notes. Still there is plenty of finesse here. Not an especially huge BM or perfect but really fun to taste.
91 points GR

The Ringer
1982 Salon – And now for the wine that has no real place at a Burgundy dinner but thank God it was there. I must have been busy getting bear hugged by Linden when this was initially poured but in selflessly acting as bar tender I found the bottle lying forgotten in an ice bucket on the counter next to the west country cider and peanuts.  Mature Salon is such a treat and this ’82 is stunning. Added aeration has certainly softened some of the angles, having been opened for a couple of hours but it is firing on all cylinders. Classic Salon, so harmonious, power and lightness in equal measure. This is a well manicured, never done an honest day’s work kind of iron fist, in an impossibly well tailored silk glove.
98 points GR

A huge thank you once again to Mike for putting this event together and getting Mr. La Paulee himself, Daniel Johnnes to fly in from NYC to check it out. It was an unforgettable night full of unforgettable wines. Thanks man! 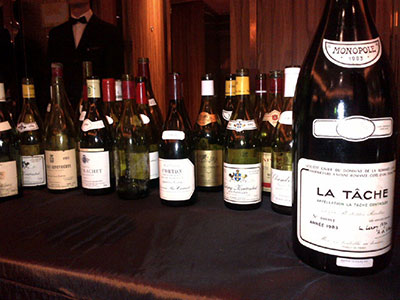 Here’s a round up of just some of the bottles poured on the night: