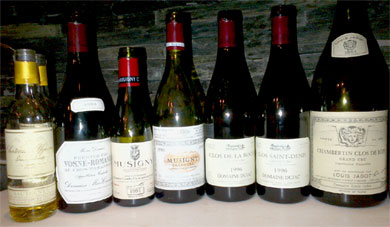 Still dizzy from the one-two punch of Selosse’s Blanc de Noirs, we moved on to some Pinot Noir in its more familiar guise with a killer line up of burgs.

1993 Chambertin Clos de Beze, Jadot (from magnum)
Really exciting crossing over from the massive Bout du Clos from Selosse to this. Intense, earthy, minerally nose, classic Beze. Follows through really well to the palate which is beautifully structured, layers of sappy red fruit, crushed rocks and spicy notes neatly woven with grippy, slightly austere tannins. Probably needs a little more time in this format but from 75cl it should be drinking perfectly. Reaffirms my view, shared by many, that Jadot often makes the second best ‘Beze’ after Rousseau. Brilliant stuff. 94 points GR

1996 Clos St.Denis, Dujac
Love, love, love Dujac and if there was a wine to make you fall in love with burgundy then this is it. A stunning, heady, sweet red fruit nose wafts out the glass and beckons you in. Full of summer strawberry and raspberry on the palate, with a really fun bubble gum texture. So drinkable, so deeelicious. At its apogee. One for the ‘just drink it and smile’ rack of the cellar. 96 points GR

1996 Clos de la Roche, Dujac
Altogether more serious. The Prince William to Clos St.Denis’ Prince Harry. Very CdlR on the nose; spicy, floral, still a little bit primal. Perfectly focussed on the palate, the intensity is spot on. Stunning layers of rich, spicy, exotic fruits. Much more complex and multi-dimensional than the Clos St.Denis but equally as drinkable. Perfect now but with many great years to come. What a pair of wines. I could get used to this! 96 points GR

1990 Musigny, Mugnier
My second encounter with this rare beast during the last 6 months, I must be doing something right. A little bit tighter and leaner than the bottle from my previous encounter. The pair of Dujacs are a tough act to follow. Still, there are plenty of glimpses of Musigny’s ethereal qualities on show. Great purity and tension here. Immense potential. The tannins are still somewhat shrouding the delicious summer fruits desperately trying to burst out of the glass. What it lacks in muscle it more than makes up for in an innate sense of pedigree. 92 points GR

1991 Musigny VV, De Vogue (from half bottle)
Ah De Vogue, so often my nemesis. A producer of enormous reputation, with a huge following, I’ve often struggled to get my head around their wines or worked out when they’re ready to drink. 20 year old Musigny in half bottle might just be the answer. A definite notch up on the Mugnier, this is a more rounded and generous incarnation of this fabled vineyard. Lovely smokiness to the nose with beautiful secondary aromas of winter truffle and forest-floor. Really well integrated on the palate with a finish that goes on and on. According to Allen Meadows (a man that knows a thing or two about burgundy) this can be a wine notorious for bottle variation. Looks like this one is a victory. 94 points GR

1993 Vosne Romanee Cros Parantoux, Meo Camuzet
‘From Artichokes to Mink Fur Coats’ could well make a nice name for a book chronicalling the story of this iconic vineyard. Once an artichoke field, now synonymous as the tipple of choice for HK’s Uber-Tycoons, whether it be Meo, Rouget or Jayer on the label,  Cros P’ commands a King’s ransom at auction. Mink fur coat is quite apt for this particular bottle as it possesses such an assured sense of breeding as it struts its stuff in the glass. A dazzling array of aromas. Showing off a similar minerality to the Jadot it is by far the most complex and multi-faceted wine in this line up of burgs. I feel there are still some awkward, slightly unresolved issues with the tannins. Maybe it just needs a bit more time. A classy young starlet about to hit the big time. 94+ points GR

1995 Yquem (from half bottle)
Sadly the ’76 Riesling Vendange Tardive from Hugel we were scheduled to try was DOA, so after a quick rummage in the cellar my kind host returned with some half bottles of Yquem. Well, why not? Lovely deep orange/gold colour. Effortless on the nose, full of honey, maple syrup and apricots. Rich and unctuous on the palate, sooo good. Why don’t I drink more Yquem? You don’t have to pay crazy money for the non-100 point vintages and frankly they’re just as good. Neal Martin loves the ’95. I can see why. 96 points GR

Wine of the night? A three way tie between the Les Carelles, Bout du Clos and the Clos St.Denis from Dujac.

As I write this we’ve just learnt that Burgundy has suffered another rotten bout of weather, wiping out huge amounts of vines. It makes one treasure great bottles such as the ones enjoyed last Friday even more.

A massive thank you once again to my host for such an amazing and special dinner.