Over the past year or so we’ve seen a huge surge in interest in Spanish wines, and particularly Rioja: one wine-loving BI client was so fascinated by the wines from this glorious region that she took herself off to Northern Spain for a few days of R, R and R (rest, relaxation and yes, ... Rioja). We've included her fascinating review below:

One long weekend in September, we set off to the Rioja wine region for a road trip, some tapas crawls, and a generous measure of visiting wineries thrown in.

Upon landing at Bilbao airport, we were welcomed by vivid bursts of lightning, thunder and hail! So much for the bright idea of escaping the daily grind for a spot of sunshine... Nevertheless we were in good spirits, as we had planned two days of visiting some great wineries. 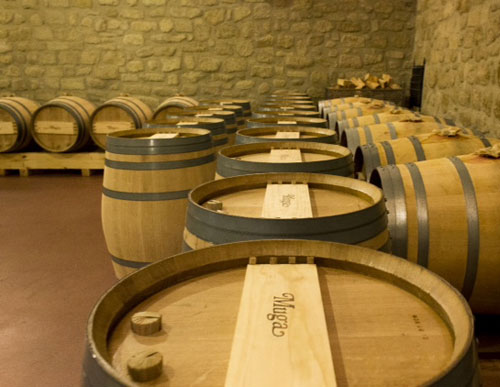 Two of the big stalwarts of the Rioja region were on the schedule today – Bodegas Muga and La Rioja Alta – conveniently located next to each other in the heritage wine town of Haro.

First stop, Muga. We started with a tour around the winery which has managed to preserve its traditions (something very important for the winemakers here in Haro), and at the same time embrace modern technology. Muga are also one of the few wineries in the area to have their own master coopers, thereby ensuring they have as much control of the winemaking process as possible. They use predominantly French oak and have close to 14,000 barrels for ageing, in addition to the fermentation casks.

Torre Muga 2009
75% Tempranillo, 15% Mazuelo and 10% Graciano. Deep purple in colour, this flagship wine was amazingly smooth given its age. The ripe red fruit flavours and the oak, vanilla and spice characteristics were evident yet still distinct. These should marry up together very well with time and take the wine to the next level, though it could easily be drunk today as well.

After a five minute walk we were at La Rioja Alta, where the very charming and witty Francisco Corpas (the European Export Manager) gave us the tour. This winery is completely self sufficient in grape production and a big believer in long ageing both in barrel and bottle. Like Muga, La Rioja Alta have their own coopers but use modern technologies for fermentation, followed by oak ageing in predominantly American oak. We also got a quick glimpse of the cellars of the eponymous members-only “Club de Coschereos”!

We tasted a range of spectacular wines at La Rioja Alta, but a few stood out to my palate:

Vina Ardanza Reserva 2004
80% Tempranillo, 20% Garnacha. A Rioja which does what it says on the tin. Lots of red fruits – predominantly ripe strawberry, with hints of oak, vanilla, coconut and spices. This wine has been aged for three years in bottle and at least three years in bottle before release. Worryingly quaffable.

Gran Reserva 904 2001
90% Tempranillo, 10% Graciano. This wine has a strong but not overpowering oak character, having been aged for four years in barrel and four plus years in bottle. The tertiary characters are very much present here, with cigar, leather and meaty aromas. However, the fruit still makes a distinct appearance. Just brilliant. 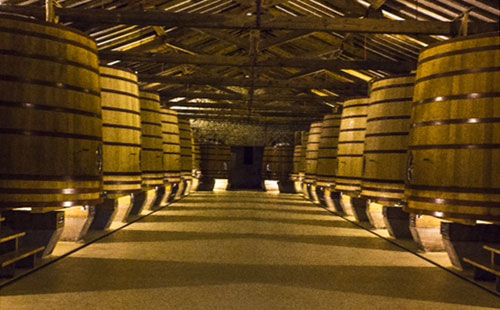 On Day Two, we visited CVNE – another stellar family run winery. At 120 years old it is certainly a member of the old Haro club, but it stands out because of its enthusiasm for adopting new technologies and viticulture techniques. CVNE has a range of wines in production; the “Cune” brand for example, makes the Crianza and Reservas. The more selective “Imperial” brand produces Reservas and Gran Reservas (whose names interestingly, were born out to cater to the English market), and also the Viña Real.

All in, despite the wanting weather we had a thoroughly enjoyable and educational weekend, and the food and wine exceeded all expectations. Salud!