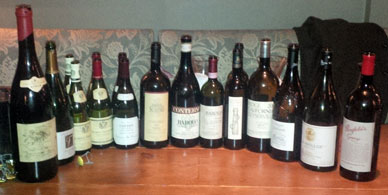 When Mr. David Thomas organises a Smash and Bash, you know it is going to be special. The usual S&B terms applied of course: a friendly meal in a great venue, serving lovely food and accompanied by the diners’ own eagerly hunted out fine wines.

This Smash and Bash however, was a little different. In September, David announced that our wine selections were to be based on two very important criteria: each wine had to be en Magnum and something properly special. With only two months to find the best, the hunt was on and there was a definite air of secrecy and competition here at BI… as the day approached, the ‘bouquet’ of excitement was palpable.

On to evening itself – with cabs at the ready after work, we were all off to the Harwood Arms for a menu inspired by and created to compliment all the great wine choices. Upon arrival we were shown to our private area and greeted with the delightful Tattinger Comtes de Champagne 2004.

Flutes of champers dispatched, we all sat in readiness for the feast that was to follow, and I have to say that it did not disappoint. Everyone began analysing and eagerly discussing the intensity of the wines and how different styles complimented, enhanced and even drew out great depths of complexity in the food. As there were so many wines of such great quality, many of these have blurred in my memory. Therefore, I’ve decided to highlight three of my favourites – undoubtedly my fellow Bashers will be able to fill in the gaps with their own!

Barolo Cascina Francia 2003, Giacomo Conterno
The aroma demands attention, with wonderful pungent spices oozing through ripened red and black fruits. Here is a legendary wine maker showing his full skills and exhaustive knowledge of traditional Barolo production. The rich and powerful grapes truly hold the balance between aroma and elegant tannins. The great thing about this wine was that its wonderful bitter cherry fruit and earthy minerality are underlined by plenty of alcohol and acidity. This of course means it can not only be enjoyed right away but also that it has the potential to be aged for a few years.

CNDP Vieille Vignes 2004, Domaine de la Janasse … or Ermitage Le Pavillon 1999, Michel Chapoutier?
The battle of the evening for me: which Rhone did I prefer?  After tasting Jaboulet’s La Chapelle a few weeks ago, the Ermitage Le Pavillon won out, as it brought back very happy tasting memories. This elixir bursts with black pepper, blackberries, violets and mineral notes - incredible. Then, a wave of spiced red and black fruits on the palate - sublime. The high acidity underscored with tannins shapes this winner, giving it a fantastic full body with a reassuring long finish. I’d say this may be interesting to keep for a few years, but I defy anyone to resist it for that long!

Corton Clos Rognet 2001, Domaine Meo Camuzet
I'm having flashbacks even now. First it was intense with the scents of mint, black cherries and cloves on the nose, but when I tasted it, it had a maturity which called to mind the soul of Burgundy. A medium body, subtle hints of strawberries and blueberries and the most exquisite balance of acidity and sweetness as you would expect of a wine from this region. This was the champion of the evening for me, and I definitely will not accept any contradictions!

To conclude and pay tribute to the efforts of my generous colleagues, I include the full wine list:

As you can guess by now, all-in-all this was a brilliant evening. Davo, plan the next one very soon - I’ll definitely be there!