Philipponnat’s Clos des Goisses is a famously charismatic single-vineyard champagne of great longevity. One of the greatest lures of Clos des Goisses is the intellectual pleasure achieved by following how it performs in different vintages and over time (only 12 vintages out of the 79 since 1935 have not been made). And there is a real chance to do it as Philipponnat are releasing mature, late-disgorged vintages and catering to their niche wine aficionado clientele even with en primeur wines to be disgorgedupon request. Clos des Goisses is at its best at the dinner table, so what could be a better place to savour it than Texture? The fabulous meal came with Charles Philipponnat’s intriguing, carefully considered vintage pairings for each course. 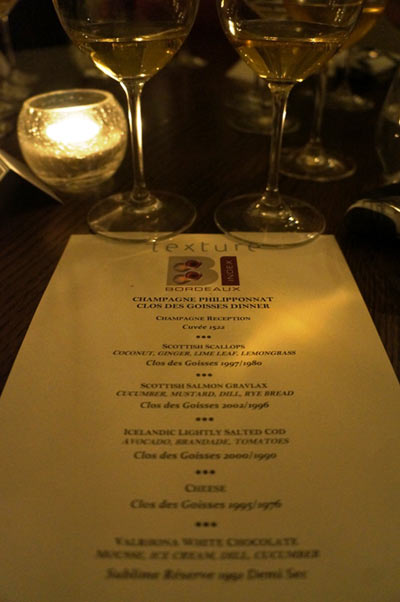 The first pair chosen to match the Scottish scallops was dubbed by Charles as the ‘grassy but not green’ vintages 1997 and 1980. The 1980 was perhaps an off-vintage for champagne in general, but not so for Clos des Goisses. The June 2010 disgorged bottle was super fresh and aromatic with aromas ranging from flowers and apricots to perfume and liquorice. Outstanding purity and lovely nervosity on the impeccably balanced and stylishly linear palate (94 points with potential for 96).

In contrast, the March 2007 disgorgement of Clos des Goisses 1997 seems to be maturing speedily. Evolved, sweet honey character with nuts, apple and baking spice aromas on top of marmalade and sherry notes. Sharply acidic, salivating palate with a distinct mineral edge to it. No longer improving, 90 points.

The pairings for the next course, Icelandic lightly salted cod, came from the great 2002 and 1996 vintages. The 2002 (February 2012 disgorgement) is still holding back plenty but starting to show its true colours of ripe opulence, vinosity, muscle and power. Its sweet aromatics lean towards ripe botrytised honey and apricot tones complemented by curry depth, ashes, red fruit, raspberry seeds, cedar wood and more. Big, bold body and lovely tingling sensation on the vivacious palate. (94 points with potential for 97).

Next to it we had a late-disgorged bottle of the 1996 (June 2011). To my surprise, it was looking more advanced than the original disgorgements I have recently had. Not the most flattering moment to drink this wine, so hold on to it. Hopefully it will come back, 93 points today.

Big, ripe years of 2000 and 1990 were beautifully matched with the Anjou pigeon. The very recent disgorgement (May 2013) of the 2000 was somewhat puzzling in its tobacco, brandy and peppery notes, coming with a mild oxidative character. But it had a well-built, fleshy, and rounded body with good freshness. I concluded that the recent disgorgements should be given some more time to find their balance and expression (92 points with potential for 95).

The 1990 (May 2013 disgorgement) was one outstanding Clos des Goisses. Astonishingly youthful with a potpourri of floral scents, ginger, nectar, liquorice and honey. Oily and fatty, but super mineral palate with a lovely zesty character to it. It is a mouthful, but I have got to admire the perfect harmony and seamlessness it offers (97 points with potential for 98).

The cheeses were matched with Clos des Goisses from two rich vintages, 1995 and 1976. I must confess I prefer the original disgorgements of 1995 to this February 2012 one we had tonight. Weighty wine with bruised fruit character. 92 points today, which is a bit disappointing considering the vintage.

The 1976 in magnum (January 2010 disgorgement) was simply magical. So youthful with slowly building complexity and amazing richness and freshness. Intriguing flor yeast and charred coffee notes, and a gorgeous salty mineral touch. A near-perfect mouthful, stunning in its vibrancy and drive (97 points with potential for 99).

Many thanks to Essi for joining us for this fantastic evening and for her enlightening blog!