‘Say a little prayer for me’ - at the Chapel

by David Thomas, Head of UK and European Sales

Jaboulet Hermitage La Chapelle is widely regarded as one of the truly iconic wines of the world, with the legendary 1961 noted as one of the greatest wines ever made.  Imagine sitting down to a majestic ‘rib of beef’ pie and seeing the 1990, 1989, 1983 and 1978 lined up in decanters to enjoy over the evening and five good friends around the table to discuss the nuances of each vintage. 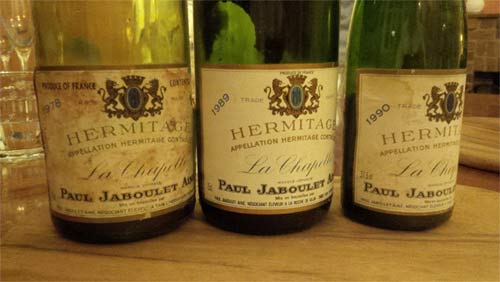 It is well recognised that La Chapelle hit a rough patch towards the end of the 1990s. Even with strong Rhone vintages such as 1995, 1997, 1998 and 1999, La Chapelle appeared to lack the depth and definition so often found in this wonderful Syrah; speculation is that production increased from a 5-figure number of bottles to well over 100,000 as the price of La Chapelle increased steadily. Perhaps the $ signs had a significant impact on the production methods?

However in late 2005 news broke that Jean-Jacques Frey, the Swiss financier, had purchased the Jaboulet company and, given his track record with estates such as La Lagune in Bordeaux, a fresh approach and attention to detail returned La Chapelle bringing it back to being one of the very top wines being produced in the Rhone today.

Back to the wines over dinner – these were served in pairs of 1983 and 1989, followed by the two 100-point vintages of 1990 and 1978.  At this point let me stress that all four wines were magnificent in balance, perfume, exotic nature and length on the palate - any of the four would have been a wonderful experience on their own.

Without question the lightest of the four, but do not take this as a negative as it was the most delicate and floral, the most open and approachable; it was sitting in that perfect drinking window, such that at least one around the table voted it the ‘wine of the night’.  It had everything you would want from a Northern Rhone – dried dark berry fruits, spice, touches of bacon fat and almost Burgundian forest floor; a beautiful wine that needs drinking, but has the structure to sit happily in a cellar for a few more years. Parker scored this 88 points and stylistically you can understand why, but for pure drinking pleasure this has to rate much higher.

1989 is becoming my favourite European vintage of the last 50 years – wines from this vintage across the board seem to contain the most restrained and elegant balance, nothing flash and rich, but just perfect poise. Again, with beautiful dark berry fruits, Indian spice and game with wonderfully refreshing acidity and great length, this is wine that shows well on its own, but with food it delivers on a totally different level.

Please do take note that this was from a half bottle – I have been lucky enough to have enjoyed the 1990 La Chapelle on more than a few occasions over the last 2-3 years (mostly due to the unending generosity of our host this evening), and it has to be one of the most extraordinary wines I have ever tasted.  Let me explain – even from half bottle the 1990 La Chapelle is so youthful, vibrant, fruit dominated, brooding, intense and concentrated that you would think it only a few years old, not 25 years old this year.  It is something else - simply remarkable - and has never disappointed from half or bottle. If you don’t have a case, and it is now bonus time, secure one!

I will admit that the 1961 has never passed my lips, but it is on my list of wines that must be tried. I have been negotiating the sale of a kidney to fund a bottle (but given my lifestyle the price quoted for said kidney is a little less than required). If the 1961 tops the 1978 then my lord this bottle has just reinvigorated my need to taste the 1961. This to me was as near to perfection in a glass as I have had for a long time – a wine that delivers on aroma alone and almost, almost does not need to be tasted, but we thought we should... It is the best of the Rhone, Burgundy and Bordeaux in a glass: subtle and restrained, elegant and complex, and delivering flavour upon flavour as time passed.  Dried fruits, spice, game, mushrooms, truffles, tobacco, pepper... if you like wine and have never tried the 1978, I would recommend seeing a kidney transplant specialist very quickly and buy yourself a bottle with the proceeds. It is absolutely a reference point for the Northern Rhone.

With the 2009 scoring 97+ and receiving the quote ‘easily the greatest and most profound La Chapelle since the 1990’ from Robert Parker, and the 2012 scoring 97+ from eRobertParker’s Jeb Dunnuck, it is fantastic to see this iconic wine back to its best.  I would advise every wine lover to put a case of each in the cellar because having tasted these older vintages I know, without a second thought, that you will be massively rewarded in years to come.

Many thanks once again to our host for the evening, to his wife for cooking the most remarkable pie and to the magical vineyards on the steep slopes of the hill of Hermitage.  It is with great anticipation (and almost childlike impatience) that I look forward to tasting the 2009 and 2012 in fifteen years’ time.