In the dreadful super-hero movie ‘Daredevil’, Ben Affleck plays a character who, despite being blind, has developed an additional super-sense which helps him not only to operate in everyday life, but to fight crime and defeat super-villains. If you’ve never seen it, don’t bother – it’s 2 hours of your life you’ll never get back – but if nothing else, this tenuous connection serves to introduce the concept of combining senses and knowledge to ascertain the truth.

Few activities raise the blood pressure amongst the wine trade quite like blind tasting and a convivial gathering at our MD’s place in Hampshire tested the mettle of a gathering of palates, ranging from the relatively experienced to the professionally proven.

As with all things Boom, the blind tasting element – by no means the focus or purpose of the evening – was a perfect blend of light-hearted entertainment and competitive thrust. The evening’s frivolities centred around a sensational supper of Osso Bucco and Risotto Milanese, washed down with three gorgeous Italians (enjoyed label out) to satisfy our souls and get our palates going. We began with two sensational magnums: Sandrone Cannubi Boschis 1998 and Voerzio Barolo Capalot della Brunate Riserva 1997, both drinking perfectly and reflecting the different approaches of their producers. The Sandrone was firm, although softening around the edges, with plenty of dried meat, black cherry, baked plum and violet (94pts); the Voerzio was polished, glossy and sultry, more focused and modern in style, with ultra-fine tannins and lashings of baked strawberry and black cherry (95pts). These were then joined by a bottle of the excellent Gaja 1990 Barbaresco – just coming into its own, with a pleasantly charred, smoky edge which was a beautiful foil to the melt-in-the-mouth Osso Bucco, replete with marrow and its intensely flavoured cooking juices (93+pts – for the wine, not the food – which had to be pushing 100). 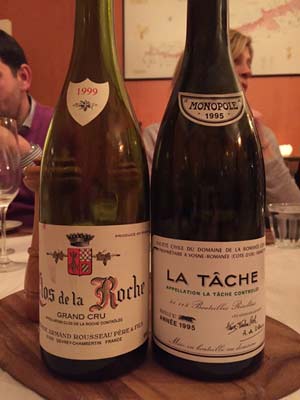 Then the first of three blind bottles came out. In fact, the first two came as a pair. Immediately the blind tasting mode kicks in: what does it mean that they are presented as a pair? Will they be from the same region? Same vintage? Will they be clever, iconoclastic examples of their regions which famously taste like they are from somewhere else? This is where one must clear the mind and focus on what is in the glass. (It also helps if you have a working knowledge of the Boom cellar, of which some at the table had more than others...)

Both red, richly aromatic, sensationally textured and perfectly balanced. So they’re both bloody good wines: no surprise and not much help there. To my mind the first had a little more weight and a touch of that seared bacon fat so prized in top wines from the Northern Rhone; the second was more perfumed and floral, with that night-flower, almost parma violet character often found in top Burgundies – especially from Vosne – but it also had a richness on the palate, a persistence on the finish, that marked it out as true quality. What was clear was that whilst both were fabulous, the second bottle was very, very good indeed. Some picked both as Burgundies: for the first, I went for Chave Hermitage, around 2000; For the second, I went for Cathiard Malconsorts 1997.

Those who went for two Burgs had the edge here – the first was Clos de la Roche 1999 from Armand Rousseau (95pts), the second was a sensational DRC La Tache 1995 (97+pts). I felt justified with my first choice, albeit not hugely accurate, but more pleased with the second – after all, Malconsorts is only a stone’s throw from La Tache, with one very narrow vineyard between them, and the age was pretty close.

The third and final blind bottle was introduced with only one proviso: it had been awarded 100 points by Parker. On the nose, whoosh, an instant rush of incredible smoked meat and seared fat, sensational layers of fruit and complexity. If I’d thought the first was Northern Rhone, then this was unmistakable; so I stuck my neck out. Applying a little knowledge (both of the region and the Boom cellar) I dived straight in – Guigal, LaLa, 1990. But which one? I went back time and time again, trying to get the wine to just feed me that last bit of info... it’s concentrated but elegant; aromatic and powerful but balanced... I went for La Turque 1990... but here my book knowledge let me down. If I knew my Parker inside out, I would have known that Turque 1990 was a 98-pointer. The correct answer? La Mouline 1991. One vineyard out, one year out. Not a bad effort. And most importantly, what a sensational wine; such power and clarity of identity, total finesse, seamless texture, incredible freshness (98pts).

Blind tasting is on one hand a silly parlour game. On the other, it’s a really great way to not only test your palate and your knowledge, but how you can combine the two under a little peer pressure.

Many thanks to our generous hosts for the, as ever, sensational wine and food.

P.S. It’s also worth mentioning that among several gorgeous Champagnes enjoyed pre-dinner, the stand-out for me was a truly sensational Veuve Clicquot La Grande Dame 1990. Fabulous concentration and complexity, buttered biscuit, brioche, all struck through with amazing freshness and vivacity. Stunning mouthfeel, wonderful length. My god, what a bottle. How can this possibly be almost 25 years old? (96+pts)