So it’s two weeks on from our epic Bordeaux 10 years on retrospective and the dust still hasn’t settled. Those of us who were fortunate enough to be in the tasting room that day all agreed that 2005 certainly lives up to the billing; there was value all over the park and at the top of the order, the Firsts and their equivalents were very, very special indeed. Since the event we have had huge demand for many of the wines, and we will continue to search out the stars and offer them if we believe the value is fair. 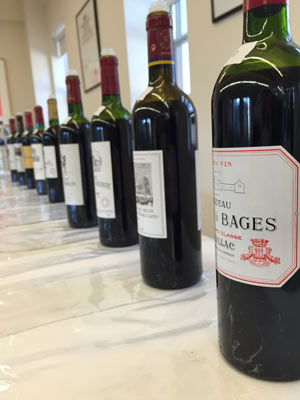 In the meantime, many of the critics have unveiled their thoughts – and here are a few to give you an idea of the 2005 picture:

“There are some truly marvellous examples of this unique, and uniquely long-ageing, category – as witness the collection I describe (below)... Thank you, fine-wine traders Bordeaux Index of London, for assembling this encouraging collection of most of the top names and quite a few others from what is looking like the finest vintage of the 21st century.” Jancis Robinson MW

“First and foremost, the 2005s live up to the billing. They clearly deserve their status as a benchmark vintage, a central pillar of the noughties between 2000 and 2009/2010... Second point to make: the blue-chip First Growths and the supposed pinnacle of Bordeaux are astonishing wines. This is one vintage where it is clutching between straws in deciding a notional "best First Growth" - it depends on the day, the condition of that bottle, what kind of mood you’re in... If I were to take say the top 200 estates then I might actually place 2005 on par with 2009” Neal Martin

“So how good is 2005? Having tasted most of the Classed Growths, including all the First Growths as well as Château Petrus, Le Pin, Cheval Blanc and Château Ausone, this is clearly a year in which quality levels are very high. Like 2010 it’s a big year in every sense. Alcohol and tannin levels are high, particularly on Bordeaux’s Right Bank, but there’s also a rich, concentrated, succulent fruit that, in the case of a wine like Château Palmer, should give pleasure for many years. Crucially, all the wines have a vibrant, dancing acidity that gives the wines their unique selling point: vitality and freshness. This was a year when nature gave such high-quality fruit that those winemakers who didn’t extract too much made wonderful wine—and, in some cases, seriously good wine.” William Lyons

“Looking back at older Bordeaux vintages is always interesting, especially in the run up to en primeur season, but it’s rare to get as comprehensive a go at an older year as the one provided by the annual Bordeaux Index Ten Years On tasting. What a tasting... This was one of Bordeaux’s big vintages of the current millennium, the last biggie before the blockbuster double act of ’09 and ’10. The wines are broader, deeper and more imposing than the 2004s and as you would expect for the most part showing less development than the ’04s did at this time last year. There is more opacity, more of a feel that these are in it for a longer haul.” Victoria Moore

“At the top end, choosing between the First Growths is an exercise in splitting hairs, they are without exception outstanding wines. And for a majority of châteaux these are probably the most complete wines for a generation. Much fresher than 2003, aromatically richer, denser and more complex than earlier fine vintages such as 2000, 1996, 1995 and 1990; more precise, refined and vital than 1982, less powerful than 2009 and 2010. The closest comparison would probably be with the cream of the 1989s. And, for all their scale and grandeur at the highest levels, the sensitively made wines retain a classical Bordeaux feel, namely a sense of moderation and lack of excess. If you have room .... and funds .... I wouldn’t hesitate!” Michael Schuster

“The 2005 claret vintage... has the true air of greatness about it. This is because the style of the wines naturally major on what Bordeaux does best: structure and scent. These are proper, grown-up red wines, with firm tannin, fresh acidity and a true sense of profundity and grab-you-by-the-lapels urgency. They are ageing gracefully and should continue to do so for some time to come.” Peter Richards MW

“2005 is worthy of ‘vintage of the century’ status... Yes, from humble cru bourgeois level wines like Poujeaux to the most extraordinary wines Lafite Rothschild and Petrus, you find much to love in 2005.” Panos Kakaviatos