For the first time in several years, our EP tasting trip began with truly horrific weather. Sideways rain and howling wind are hardly the conditions to put one into a great mood for tasting - but with a fun first evening under our belts and the prospect of some fascinating tastings ahead of us, we set off for the Medoc with more than a little spring in our step.

Much has been said about the complex growing season in 2014; we knew that the vintage was saved from mediocrity by one of the greatest, hottest and driest 'Indian' summers on record - and that as a result of the late arrival of the warm weather, those grapes which develop further into the season were likely to be the trump card. This meant Cabernet Sauvignon, Cabernet Franc, and Petit Verdot to a certain extent, were expected to offer the finest examples of the vintage. Where better to test this theory than in the heartland of Cabernet - St Julien and Pauillac?

We kicked off as is customary at Beychevelle where, unlike in previous years, the Gironde at the end of their considerable acreage was totally shrouded in fog and rain. The first wine of the tasting is often a challenge - poor old Beychevelle has to carry the responsibility of being our 'calibration' wine every year - but not so this year: Beychevelle was in fine form and immediately the Cabernet characters were singing from the glass - incredibly pure, layered blackcurrant, fresh mint and pencil lead combined with an elegant, bold structure. The portents were good. At this point we discovered the wine was actually only 39% Cabernet... and yet its personality was pleasantly dominated by it. We moved on hungry to find out more. 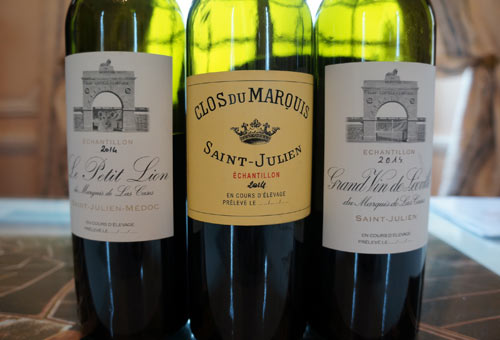 What became clear as we progressed through Gruaud Larose, all the Leovilles and Ducru Beaucaillou, was that the vintage has allowed winemakers to truly express their terroir through the medium of their chosen grape variety. The quality of the Cabernet is not in itself the reason to celebrate; it is through the quality of the Cabernet that the vineyards can be so clearly and elegantly expressed. To make an analogy: the grape variety is the paint; the winemaker the brush; but it is the vineyard itself which is the artist. And boy oh boy is there some artistry in these 2014s... arguably the finest two wines we tasted in the morning session were Leoville Las Cases and Ducru Beaucaillou - both remarkable expressions of Cabernet which balanced extraordinary purity of fruit with an absolute clarity of mineral character. The freshness is impressive and the structure and alcohol levels suggest a really good, fruitful (!) life ahead.

After an excellent lunch with good friends at Chateau Belgrave, we ploughed our way into perhaps the most important 4 hours of the whole trip: Monday afternoon is First Growth o'clock. We started, as one does, with Lafite. We often discuss how Lafite is difficult to taste from barrel. Even the great Bob Parker seems to get this one wrong most of the time, as his in-bottle scores invariably sit at the top of, or above the top of, his initial in-barrel points spread. Well, no such difficulty this year. Lafite is absolutely blindingly good, as pure an expression of Cabernet as one might hope to find. That is, until you get to Mouton; this is Cabernet in excelsis too - but so, so different. Whilst the Lafite is all elegance, poise, purity, clarity and charming restraint, the Mouton is juicy, polished, explosive and eye-opening. Two brilliant, upper 90 point glasses of wine. 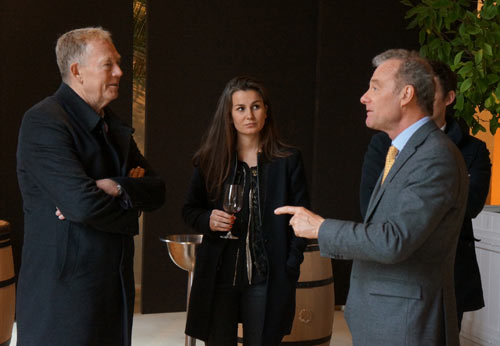 It just got better with Latour - which of course, sadly, we will not be able to offer for many years since their departure from the Primeur system - which was beautifully linear, expressive and masculine; followed by Margaux and its fabulous offspring Pavillon Rouge and Blanc. These latter pair deserve more than a mere mention in dispatches: the Pavillon Rouge was, as agreed by all present including M. Pontallier himself, better than many pre-2000 vintages of the Grand Vin; Pavillon Blanc was, in the main man's own words, "the finest Pavillon Blanc ever made under my control". We agree. It's almost painful in its intensity and concentration - make no mistake, this is an amazing year for dry whites.

Other brilliant wines of the afternoon included Pontet Canet - which, as per usual, tasted entirely of itself (in a good way - it's a fabulous glass of wine, it just doesn't really sit in context with the rest of Pauillac) and Grand Puy Lacoste; another great exponent of the 'talking terroir' of 2014.

Dinner was a quiet, simple affair; at Pichon Baron with the charming and genial Christian Seeley, during which we consumed many great vintages of Pichon and finished with two truly extraordinary bottles of Quinta do Noval Nacional 1994. A fitting way to end a great first day. 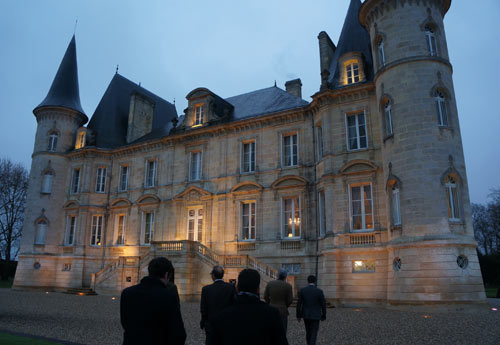 What did we learn from our tasting sessions today? Well, as you may have gathered, the Cabernet is pretty darn good. But this isn't the story in itself; it's the reason the vintage will become so distinctive in the future. Quite simply, this year's Cabernet has offered the Left Bank properties an opportunity to really speak their vineyard character in a way we haven't seen for several years. In addition, there is more than enough fruit richness, tannin, acidity, alcohol and extract to make for serious ageability. These will be fascinating and utterly enjoyable wines to follow; I for one will consider my life truly the poorer if I never taste 2014 Leoville Las Cases again.

Tomorrow brings more great terroir wines - into St Estephe before more Pauillacs and St Juliens, along with a smattering of Haut Medocs. Watch this space.