It's remarkable that we felt so fresh after last nights festivities at Pichon Baron, but Bacchus appears to be smiling on us today. It's wet and windy but overall conditions for tasting seem pleasant, judging by the performance of the wines so far; and today we are heading for what we hope will be more prime examples of 2014, late ripened Cabernet.

Before we start, a brief reflection on yesterday. With a night's sleep under our belts we chewed over some of the wines from the previous day and it has to be said - we really hardly tasted a bad wine. Of course, there weren't any that one would truly call 'great' either - none so far have troubled the man holding the '100' sign - but several have hit the mid to upper 90s. Looking back over last year's scores, it's clear that overall the wines are at least 3-4 points better and so much more enjoyable for that. These are drinker's wines, therefore, but in the traditional sense: they have all the ingredients for a very long life in the cellar - structure, density, mid-palate weight (for the first time since 2010), acidity and alcohol; in addition, most have a very clearly defined sense of both their terroir and the vintage. In blind tastings in years to come I suspect you will identify 2014s pretty easily due to their extraordinary clarity of fruit. The Cabernet, truly, is very, very nice this year. 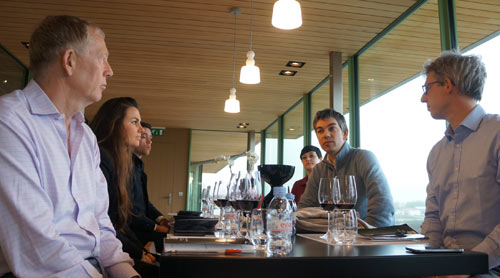 Today started with Pichon Lalande, which is gorgeous in both first and second wines. End of. From here we progressed up into the wilds of St Estephe where we tasted three of the best wines of the trip thus far: Cos d'Estournel, all elegance, finesse, fine bone structure and dense fruit; Montrose, a broad-shouldered, masculine but utterly charming wine; and Calon Ségur, a more exotic, idiosyncratic wine with an opulence not often seen thus far on the Left Bank. Very much worth mentioning all the second wines as well. Dame de Montrose was a serious bottle packed with fruit, a great, ambitious structure and really juicy Cabernet fruit. Pagodes de Cos was a genuine 'little brother' to the Grand Vin, with bags of elegance, ripe fruit and finesse. Perhaps the most striking of all though was Marquis de Calon; a beguiling, exotic, flamboyant wine - no issues with Merlot ripeness here (it was picked between 15 and 16.5% alcohol!) but the balance is struck with some strict, juicy but firm Cabernet that prevents the wine from being flabby, overblown or over alcoholic (the finished wine is just over 14%).

Lunch at Lynch Moussas was enjoyed with a very nice bottle of 2009 - perhaps to keep our feet on the ground... just a few more visits to go and we would have the Left Bank in the bag. 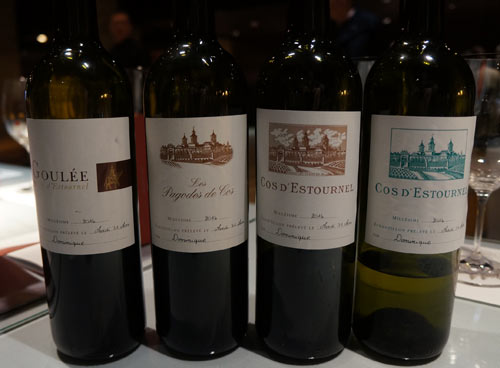 We kicked off our afternoon at Lynch Bages. First, and most extraordinary, we were early (!? no-one is EVER early during primeurs); second, what was fascinating was that the white outshone the red. Just. Further proof that there are some killer dry whites in 2014.

From here we piled down to the UGC tasting for Margaux at Chateau Dauzac. This was a really interesting half hour - not because any of the wines were stellar, although Rauzan Segla and Labegorce are both fine, fine efforts with real depth and class - but because for the first time since 2010 the wines have genuine depth, richness and structure. The past 3 years have been tougher on Margaux than anywhere else; wines were weedy, thin, acidic, rough and short. This year they have stuffing and ripe fruit, fresh acidity and perfume. A really encouraging sign for the vintage overall.

The final chateau visit of the day was at Palmer. Thomas and Chris talked us through a pair of fascinating wines in Alter Ego and the Grand Vin, neither of which seemed to suffer as a result of their high Merlot content. They are ripe and distinctive, perhaps as a result of their switch to biodynamics. 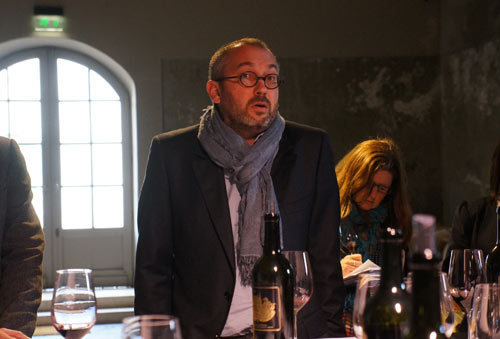 Before saying goodbye to our first group of tasters as they headed back to London we paid a visit to the UGC for Sauternes at La Lagune (thank goodness we are no longer forced to head all the way down South for this tasting!). Much has been said about the sweet wines in 2014 and it's clear that in some properties, botrytis was in full force; the best examples, which included Sigalas Rabaud, Lafaurie Peraguey and Doisy Vedrines, beautifully balanced citrus freshness with tropical fruit and that rare thick cut marmalade character that comes from fully developed noble rot. They might not be quite up to 2011 or 2009 standard, but they are seriously good and if they price well, will be well worthy of a place in the cellar.

Dinner in St Emilion was nothing short of a delight. Ronan Laborde of Chateau Clinet and his lovely partner Monique Montepini, plus Jean Michel Laporte of La Conseillante, joined us for an evening of great food and blind tasting. Between us we brought, and enjoyed, La Grande Dame 1989, Troplong Mondot 1990 and 1998; Pichon Baron 1989; Lynch Bages 1989; Groffier Chambolle 1er Cru 2005 and Gaja Sperss 1998 - all washed down with a few bottles of Roederer 2008.

Tomorrow morning we get stuck into the Pomerols and St Emilions. More news to follow...