Madeira Madness and Magic in London

‘Truly one of the great wine dinners I have been to.’

A throwaway statement, made in the heat of the moment. More than a week on, I still feel the same. But I wasn’t the only one making this comment – on the other side of the world, HK MD Guy Ruston was reeling out the same line, albeit on the subject of a very different dinner. This was a classic BI scenario: in the UK, we held a Madeira dinner at Charlotte Street’s Pied a Terre with Chris Blandy and a cornucopia of his company’s startling wines; meanwhile in HK, we played host to an astonishing 1959/1961 dinner (more on this in another blog). Both events seemed a fitting way to usher in the new era of BI...

It’s hard to say exactly why our Madeira dinner was such a success. It is almost certainly a case of ‘greater than the sum of its parts’, although the parts were all certainly there. Great company, excellent food, astonishing wines and a general sense of education, relaxation and conviviality the likes of which is rare to find (and believe me, we do many, many excellent dinners which I would gladly attend all over again). The overall effect was most surprising. When I finally found myself in bed at 1:30am I simply couldn’t get to sleep, so energised was I by the electrifying acidity, remarkable complexity and overall fascination of the wines from this most peculiar of origins.

Madeira in a nutshell: it starts with fairly non-descript wines grown on a small island about 450 miles off the coast of North Africa. It’s fortified, traditionally done to preserve the wines for shipping. Historically, when travelling the world as ballast in the bottom of ships, and fundamentally crossing the equator, the barrels of Madeira wine were heated to a very high level, which rapidly oxidised them – leaving a strange, enthralling style of wine which was rich in flavour, high in acidity and essentially indestructible to the ravages of time and oxygen. Over time, this process became modified and modernised by placing the barrels of fortified wine in multi-level ‘lodges’, in the centre of the capital Funchal in the case of Blandy’s, where different levels achieved different temperatures – the higher the hotter – therefore allowing the same process as the crossing of the equator but at a controllable range of different speeds. There are four main styles, driest to sweetest: Sercial, Verdelho, Bual and Malmsey – plus the uber-rare Terrantez. Our dinner would encompass them all in a range of ages and styles.

We gathered in Pied a Terre’s private bar, enjoying a mouthwatering 1998 Sercial Colheita and fried parmesan crisps to get us in the mood. Eclectic was the nature of the guest list: sportsman, musician, doctor, financier, entrepreneur... those who knew Madeira inside out (we had three of the world’s great authorities, including Mr Blandy himself) and those who came at it absolutely fresh.

Our first course of celeriac, apple, walnut, Belper Knolle and truffle was well accompanied by a flight of Verdelho, the highlight of which was certainly the deeply savoury, aromatic and intensely focused 1984 – although a very significant mention should be made of the superb 1998 Colheita (a 15-year-old Madeira which is picked in a single year as per a regular vintage, but aged for a shorter period – 15 years in this case). This packed a real punch of flavour ranging through Chinese tea, smoked almonds, baked apples and sourdough, shot through with fine, exciting acidity. 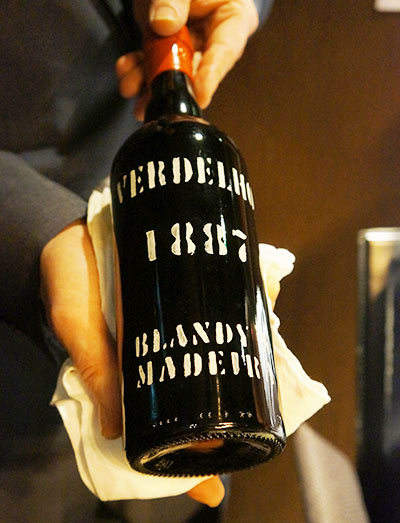 The second flight was the distinctive Terrantez, a rare, fickle and delicate grape (think Pinot Noir x10) which only produces a harvest around one year in every four. Given its quantitative unreliability, it is understandably planted in miniscule quantities. Why bother when there are more consistent grapes to choose from? Put simply, when it grows successfully, it is the very essence of Madeira; it sports a fascinating tension between dry, saline and savoury, and fruitcake-rich generosity – with the sharpest, most invigorating swathe of acidity. Both the 20 year old and the magical 1977 wore their natural characteristics with grace and panache, whilst again the single vintage wine was arguably deeper and more complex; the 20 year old has to rival German Riesling and top Sherry as being among the very best value wines from anywhere in the world.

The main course of herb-crusted fallow deer was an absolutely stunning dish, paired with an excellent Douro red from the Symington family – Quinta do Vesuvio 2011 – but in truth we were loving the Terrantez so much that when I looked around the table not much of the red was being consumed! It was perhaps at this point that, for the newcomers, the Madeira penny really started to drop. The wines were proving themselves not only a capable partner for the meal, but their natural energy and freshness were a natural fit. Both food and wine were benefiting from the collaboration, and you can’t ask for much more than that.

An aside here: one guest asked when the wines had been opened – assuming a couple of hours of breathing or possibly decanting time. ‘Monday morning’ was the surprising response – especially as the dinner was on a Thursday night. Proof if it were needed that these wines truly are built on seriously strong foundations.

Possibly the best ‘traditional’ pairing came next – three Buals with a selection of blue cheeses. The 1966 was a thing of immense beauty, a deep, dark, intense wine of incredible baked fruit richness and spicy, nutty complexity. However it was the 30 year old that kept me coming back for more, with its slightly lighter character and more pronounced, accessible sweetness and acidity that made it a brilliant match for the tangy, salty cheeses. The 2002 Colheita also punched well above its weight with quite profound smokiness alongside that signature molasses-rich nature.

Dessert was served with the richest style – Malmsey – made from the Malvasia grape. This is typically grown on the lower altitude vineyards of the south side of the island where it can gain maximum ripeness, creating a more intense sweetness. As with previous flights we had two examples – a relatively young colheita 1996 and a richer single harvest 1988. Both were a superb foil to the Caramelia Delice and honeycomb but there was something in the chocolatey, molasses-thick weight and intensity of the 1988 which, allied with that impossible acidity, really stood out. By now the party was in full swing and buying decisions were clearly being made all round the table.

If we thought we were done at this point we were dead wrong; Chris had a surprise in store. A bottle carefully transported from Madeira that very morning, wrapped, uncorked and served blind. Clearly this had some dramatic age to it – considerably more than anything we had enjoyed subsequently. Amazing complexity on the nose, with woodsmoke, antique furniture, dried herbs, sultana, orange peel, melted brown sugar, soy... mesmerising. The palate still astonishingly fresh and vibrant, mouthwatering and lively, but with a density and intensity that got the mind racing. The flavours were more heavily weighted to the savoury, with smoked almonds, crushed hazelnut, sourdough and burnt butter – with a balance of soft raisin and Demerara to take the edge off. Some went 1920, I went a little earlier – 1910. But one guest – proving his muscle as one of the great minds of Madiera – got it spot on: 1887 Verdelho. Extraordinary and a fitting way to sign off what was – unreservedly – one of the very best wine dinners I have ever been to.

A huge thanks to Chris Blandy for hosting, Richard Girling for assistance and Richard Mayson for fascinating insights on the night.