by Giles Cooper (Head of Marketing and PR)

A very happy, if slightly belated, New Year to you all.

2016 certainly proved to be a whirlwind – politically, economically and culturally – so hopefully you managed to see in Christmas and the New Year in a relaxed and jovial fashion. 2017 will undoubtedly be another year full of twists and turns so let’s strap ourselves in and do our best to enjoy the ride...

In the meantime it’s worth reflecting on some of the vinous successes of 2016 before looking ahead to what we can expect in 2017. 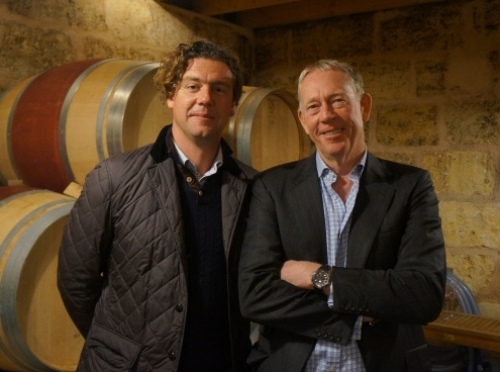 2016 will be remembered as the year Bordeaux Bounced Back – thanks in part to a superb 2015 En Primeur campaign (Lafleur was one of our absolute favourites - owner Baptiste Guinaudeau pictured above with BI MD Gary Boom) and the resurgence of exports to Asia and the US as a result of the currency fluctuations. Our LiveTrade Index ended the year up over 21% primarily as a result of the boom in sales in H2 following the European Referendum; but this certainly isn’t the whole story.

Bordeaux prices fell so considerably between 2011 and 2014 that even with the consolidation year of 2015, the wines still looked good value – even more so when you consider the astonishing price rises we were seeing in Burgundy. Buyers were now able to pick up top wines from drinking vintages for less than the price of a 1er Cru Gevrey from a top grower. In addition, overstocks in HK which had built up during the 2008-2011 boom appeared to be thinning to the extent that restocking was in evidence – further depleting stocks in the UK and Europe and continuing to drive prices up in a healthy fashion. We see this trend continuing at least as long as sterling remains weak against the dollar, and there are few reasons to think that it will strengthen in the short term.

It was also a fabulous year for Champagne as we added, for the very first time, a number of wines to the LiveTrade platform; the resulting demand on both sides of the trade was considerable and we ended the year with two Champagnes in the top 5 selling wines on the platform.

Burgundy 2015 is obviously the talk of the town and we will continue to put the very best wines we can find in front of you. It is certainly an excellent year for reds and at the top level wines will sell at very high prices, likely to rarely be seen again. However canny buyers will recognise that in a rare opportunity, there is quality to be found at all levels; it is definitely a year to buy up Bourgogne Rouge and other affordable Pinots from the best growers, including the ‘humble’ appellations such as Savigny-les-Beaune, Maranges, and especially the Beaune 1er Crus, some of which look exceptional value and have genuine long-term ageability. There are some fine whites too, likely to be better for younger drinking than the ‘14s, but with a ripe, generous character that is most appealing.

After the stunning wines of Bordeaux 2015, is it possible we could see another back-to-back vintage success with Bordeaux 2016? From what we have read, heard and tasted so far, the answer appears to be ‘yes’. The 2016 vintage had its challenges early on but came through strongly with a superb summer and harvest period. Not only do we expect the wines to once again be of very good to excellent quality, there ought to be decent volumes available too. Of course, the fly in the ointment could be price, given that we were buying 2015s at around €1.30 and it is likely that 2016s will be bought at closer to €1.15... we head out to Bordeaux in early April as ever and will report back on the quality and style – with judgments on what is worth buying as and when the prices come out.

Outside the Primeur system we also expect a new ex-chateau release of the venerable 98-point (NM and RP) 2005 from Chateau Latour, alongside the early-drinking but very fine 2011 Forts de Latour. Later in the year we should also see the ‘best ever’ 97-RP 2010 Forts de Latour. Also expected, but with a little more pause for thought given what we expect to be a very high price indeed, is the 2015 Chateau d’Yquem; with 98-100 points from Neal and the suggestion that it “will rank alongside the 2001 and 2009” this is clearly an opportunity for those who marvel at the magic of the world’s greatest example of botrytis to add one of the greatest vintages ever produced to their collection. 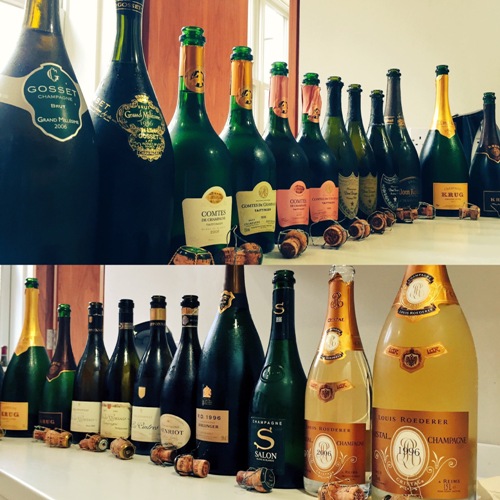 There will certainly be more exciting Champagne releases coming throughout the year, but most notable are two very different offerings from Krug and Dom Perignon; whilst Krug will be releasing two classical entities in the form of the 2004 Vintage and the 2008-base Grande Cuvee (Edition 164) – both from superb, Champagne-friendly years, Dom Perignon will be breaking the mould and leaping forward three years to follow their 2006 with a 2009 vintage. We know from experience that DP Chef de Caves Richard Geoffroy loves an unusual vintage in which to capture a new ‘expression’ of Dom Perignon and if their 2003 is anything to go by (not the easiest DP to get along with in youth but already blossoming into something quite unique and special) then it should be fascinating.

We will also see two new vintage releases from the venerable and ancient Dom Ruinart, with the 2006 Brut and long-awaited 2004 Rose hitting our warehouse. These are always magical and expressive Champagnes and if other 2004 prestige Roses set the standard, the DR will be something to behold. As you can tell, we’re pretty excited about this.

The Rhône will have a mixture of vintages released across the year, with the 2013 La Las from Guigal and 2014s from Chave. While none of these will reach quite the dizzy heights of 2012 or 2010, they are always stunning wines and will certainly give huge drinking pleasure – long before either the 2012 or 2010 are nearly at their peak!

There will also be a number of releases from the fabulous 2015 vintage: for starters, the already-scored 97-100pt (WA) Hermitage La Chapelle 2015 from Jaboulet will make its way into the market and there will be many others which will amaze and astonish. Make no mistake: 2015 is a very special vintage indeed – in the words of Marcel Guigal “2015 is on the level of 1929, 1947, 1961. It is surely the wine of a lifetime. In 55 years, I’ve never seen anything like it.”  In late Spring Michel Chapoutier will look to grow his world-beating list of perfectly-scored wines with the 'Selection Parcellaires' release from the eagerly-anticipated 2016 vintage, then towards the back end of the year we will also see the superb 2016s from Chateauneuf du Pape.

One of the most popular and fastest-growing categories over the past few years has been Italy, and 2017 looks to be another interesting year with some serious wines hitting these shores.

The 2014 releases from the coastal region of Bolgheri will be focused on spring and autumn, starting with Sassicaia in February and Ornellaia in March, and subsequently Masseto and Solaia in September. Whilst the 2014 growing season presented challenges for many across Italy, the top wines of this magical coastal region appear to have thrived and in fact made expressive, transparent wines which speak strongly of their superb terroir. As The Wine Advocate’s Monica Larner says “The 2014 vintage delivers many unexpected surprises. Knowing the challenges and difficulties of the growing season... I expected to be disappointed by the wines. I can’t say that I was. If you are fearful of green or herbaceous overtones, you will not find them in 2014.”

If your tastes lie further north, then look out for the 2013s from Barolo; we have already seen the immense quality of this vintage in the already-released Barbaresco 2013s, and the Barolos will follow in the same vein. As Monica Larner says of Piedmont “The 2013 vintage is shaping up to be a classic year not unlike the successful 2010 season... You can taste these delicious results in the 2013 Barbarescos that are hitting the market now.” In particular look out for some excellent releases from Giacosa, along with our typical favourites Vietti, Roberto Voerzio and Paolo Scavino, almongst others.

Spain has also recently enjoyed boom-times at BI and we look forward to new releases from across the past 10 or 15 vintages – given the spread of potential ages for Reserva and Gran Reserva wines, particularly from Rioja, there will be something to satisfy in all categories; plus they will continue to represent crazy value. We will also have new releases from current BI favourite Terroir al Limit along with any other wacky bits and bobs we can get our hands on.

South America continues to bamboozle with stunning, highly-scored wines which the likes of James Suckling and The Wine Advocate’s Luis Gutierrez simply cannot get enough of. In James’ own words: “Chile and Argentina are also making some of the most drinkable wines in the world. We’re happy to see the region move away from an old school style of dense, high-octane reds and embrace a more harmonious approach that emphasizes viticultural areas as well as vineyards.” From Chile, Eduardo Chadwick’s 2015s will include the astonishing slate-soiled, Burgundian-styled Las Pizarras Chardonnay and Pinot Noir (already sporting 98 and 99 points respectively from JS), in addition to the follow up to the 100-pt Vinedo Chadwick from 2014 and the impressive Sena. Down in Argentina we will see another vintage of the double-Catena efforts of Catena Zapata and Laura Catena’s incredible Cheval Blanc inspired El Enemigo – both of which are due in the Autumn.

We’ll also see action from the ‘old-new-world’ in the form of Australia and the USA, with what is bound to be another remarkable set of wines from Penfolds in October and one of our most anticipated releases of the year, The Mascot 2011 from Will Harlan – a very smart guy making a name for himself away from the family’s eponymous vineyards. There are of course many, many more, including Glaetzer, Shafer, Stag’s Leap and Opus One to name just a few...

Last but my no means least we have the wonderful world of BI Spirits. Our focus for 2017 will be continuing to find rare old parcels of the world’s greatest whiskies, cognacs, armagnacs, brandies and rums to be bottled exclusively for our clients. Following on from the roaring success of the 1914 Hermitage Touzac Cognac, of which we bought (and rapidly sold out of) the very last 56 litres in existence, we are already well into negotiations for some equally impressive and fabulously priced morsels for you to tuck into late into the evening. Keep your eyes peeled over the coming months.

In addition of course we will maintain our position as traders of the finest, rarest and oldest whiskies including limited edition releases from the top distillers – along with a raft of wonderful gins, vodkas and anything else with at least 40% on the label.

So, in essence, much to look forward to.