Roll out the barrel - the world of rare spirits

At BI, we are bordering-obsessive when it comes to finding unique spirits which have three common traits – story, quality and price. The beauty of searching out single casks is that we are in control; we control what we bottle, when we bottle and how we bottle. We aren’t interested in following others, we are interested in finding spirits that others can’t. We'v already had great success with our own bottlings of single-vintage Macallan and the extraordinary 1914 Touzac Grande Champagne Cognac - completely exclusive offers which captured our, and your, imaginations.

We even purchased a cask of 1990 Macallan from one of our own team, who bought it as an (very sound, as it turns out) investment a couple of decades ago; if the quality and provenance are right, we're always interested to know more. So if YOU are one of these crazy folks who bought a cask of whisky, brandy or rum as an investment, drop me a line and we can have a meaningful conversation about what it might be worth.

In the meantime, we have identified the rum category as a big growth category in the next 12-18 months and wanting to stay ahead of the curve, it brings us nicely to our current BI Exclusive bottling. 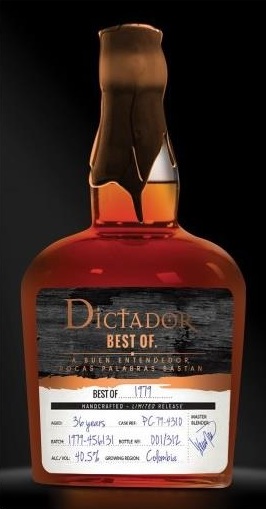 Since the roaring success of our exclusive bottling of 1914 Cognac we have been on the lookout the world over for our next gem and we have found just the thing!

Columbian rum?  Do they even make rum?  You’d be forgiven for not immediately associating Columbia with rum, rather you are much more likely to think of Jamaica, Trinidad and Guyana.  However, it is precisely this disassociation that makes our next BI Exclusive bottling so exciting.

It is said that in the late 18th century, Severo Arango y Ferro arrived in Cartagena de Indias in Nueva Granada (present-day Columbia) with plans to whip the tax collection system into shape for Spain.  His approach quickly earned him the nickname ‘Dictador’.  It wasn’t long before he discovered and quickly fell in love with rum and this love affair soon blossomed into him becoming a key trader of exotic sugar cane spirits, which at the time were considered a currency in the region.

In 1913, one of his descendants established a distillery with the aim of becoming the finest rum producer whilst honouring the ‘Dictador’s’ legacy. Fast forward to 2017 and Dictador Rum has become one of the most awarded rum brands in the world with their 20 Year Old being the most awarded aged rum ever. Not bad for a rum that comes from a country that flies below the rum radar.

Whilst Master Blender Hernan Parra is praised for the ever-growing Dictador range, it is the distillery’s stocks of old and rare casks that really piqued our interest, some of which are amongst the oldest rum stocks in the world. Known as the ‘Best Of’, Mr. Parra carefully selects a few casks each year that he believes showcase the very best rums that the distillery owns.  There is no fanfare alongside this process, it is purely a labour of love.  It is therefore our absolute pleasure to be able to offer you one of the best rums that we have ever tasted.  Whether you are a rum, whisk(e)y, Cognac or Armagnac drinker, this is a real all-rounder, and we are sure that you will find this to be one of the most drinkable but complex spirits in your drinks cabinet.

Distilled in 1979 and aged in American Oak, these are the last bottles in existence. Here is my tasting note:

‘The nose provides lashings of butterscotch and vanilla before wonderful flavours of chocolate-covered coffee beans as well as more butterscotch and a hint of honey on the palate. The finish is rich in vanilla and toffee notes but there is a superb dryness that brings everything together and leaves an incredible length with more coffee, chocolate and vanilla.  Superb.’

So if you like the sound of it, click here to visit the product page and pick up a few bottles before they run out. As is always the case with these single casks: when they're gone, they're gone!