“I think Brian Moore's gnashers are the kind you get from a DIY shop and hammer in yourself. He is the only player we have who looks like a French forward.” - Paul Rendall

England and France have been friendly and not so friendly rivals ever since “that arrow” during the Norman Conquests in 1066. Thereafter followed the Anglo-Norman, Anglo-French, 100 Years, Seven Years and Napoleonic Wars, with numerous other skirmishes painting the history books red. Finally allies for most of the 20th century and since, England and France have had to save their mutual blood-letting for the rugby field in an annual fixture known on both sides of the Channel as ‘Le Crunch.’

These two great rugby nations have been going at it hammer and tong since 1906, with some of my favourite rugby memories from this great fixture; Philippe Saint-Andre’s wondrous try at Twickenham,  Johnny’s wand of a left boot in the early 2000s (if you’re an England fan) or Serge ‘The Grim Reaper’ Betsen’s scything down of said English hero (if you’re a French fan). 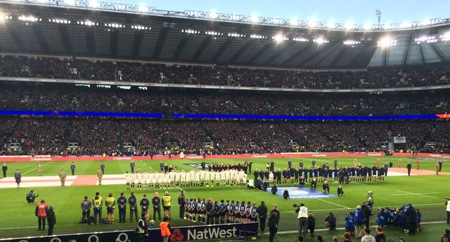 In general, the only claret spilt (boom boom) in the company of wine merchants is of the vinous variety and so we decided to celebrate the 103rd meeting of these two great foes true to form, with half a dozen top Clarets and a couple of exceptional Burgundies. La Trompette was the pre-match venue with our table a fine mix of wine merchants, friends and vignerons representing England and France, ready to eat, drink and be merry before heading off to Twickenham for the big clash.

Chef Rob Weston has been turning out top notch food at La Trompette since 2013, re-affirming its status as one of London’s go-to dining establishments. Their Roast Wigeon (wiki-it) is to die for. Our wines weren’t bad either.

Kicking off with a magnum of 2014 Corton Charlemagne from Jadot

I love the white Burgs from ’14, and this beauty is exactly why, obviously young, this is stacked and packed with lime, citrus and fresh minerality with plenty of body. A promising young player making his debut. One to follow (92+pts) 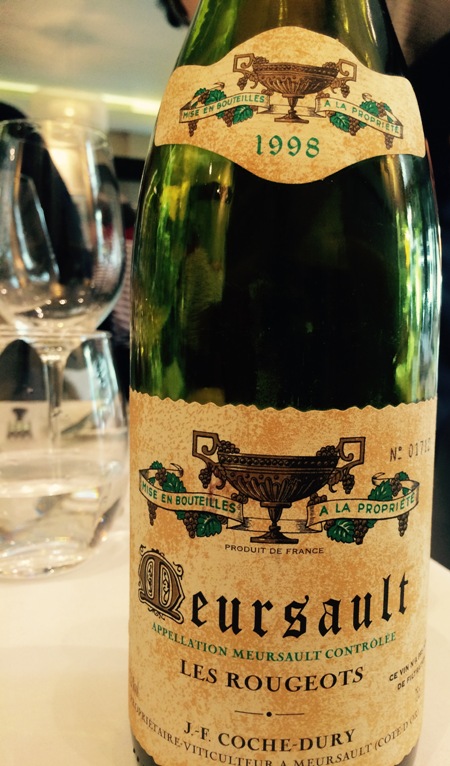 Next up 1998 Meursault Rougeots from the mighty Coche Dury

Holy **** this is good. So fresh, so vibrant, with so much depth and richness. Is there a finer producer of Chardonnay on the planet? Power, grace, flair, if this were a rugby player it would surely be one of the great, darting French backs of yesteryear. (95pts)

What does one drink with Wigeon? How about a 2003 Haut Brion in magnum? Thanks...

Ooof – the iron fist just binned the velvet glove. Rich, exotic black currants and tar unfurl from the glass, with just a hint of crushed rock and HB’s tell-tale minerality. I’ve never been particularly enamoured with the ‘03s but this is a cracker. One of those monster French forwards, raised in the mountains on steak and eggs. (94pts)

A cheeky 1996 Leoville Las Cases interlude. Why not?

Moving from Wigeon to Welsh Lamb and the big guns are being rolled out.

First up, 1995 Chateau Margaux in magnum

More red fruits than the HB and overall a lot more intellectual and nuanced rather than simply bull-dozing power and energy. This is an excellent Margaux and compelling with Chef’s Welsh Lamb, providing a formidable ‘Second Row’ with the HB. (94+pts) 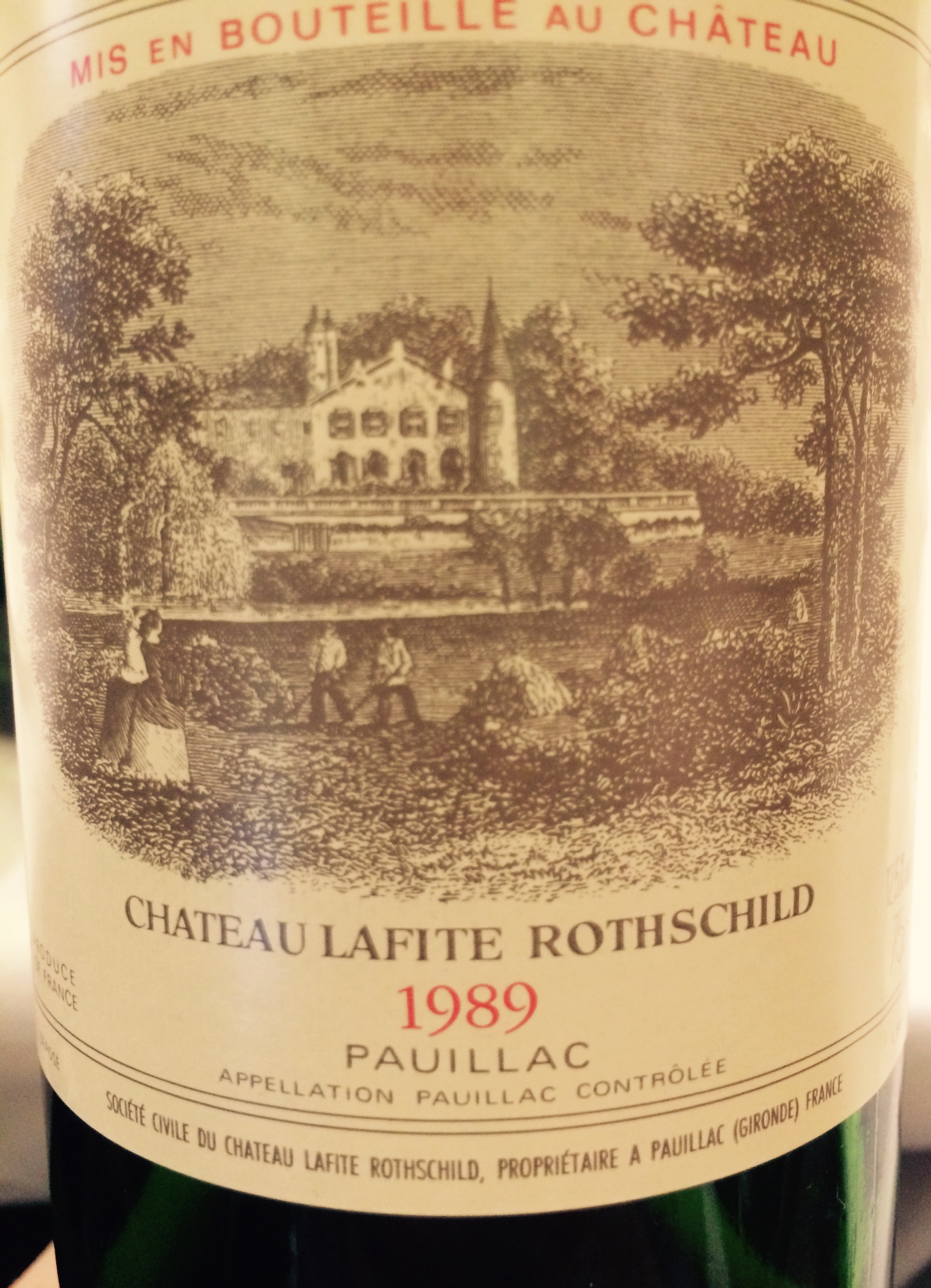 It’s funny, in value terms Lafite remains one of our biggest sellers in Asia, yet I get to actually drink it so rarely these days... but 1989 Lafite is my (red) wine of the day.

A beautiful, leafy nose with cedar, black cherries and a hint of menthol. So balanced on the palate too, dancing effortlessly from brooding dark, gamey notes to finer, graphite-like notes. A fleet-footed winger to get you up from your seat. (95pts) 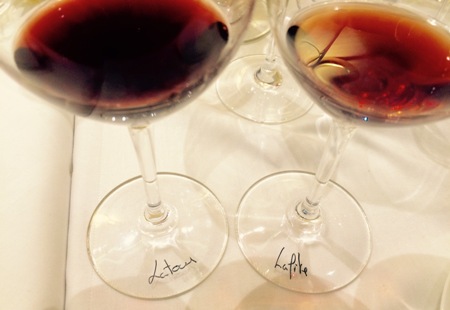 Still incredibly youthful, the Latour quietly broods with poise and power, while the Lafite in contrast is so flamboyant and inviting, the tannins have melted away to reveal delicious, irrepressible red fruits. The Latour takes some coaxing, still firm but the depth is mind-boggling. The stoic, precise English fly-half to his more mercurial French counterpart perhaps? Both 95pts.

A deliciously plump and fresh magnum of Ruinart Blanc de Blancs, after all “you can’t Go from First Growths to beer” as one of our group quipped, was the perfect ‘livener’ to see off an exceptional lunch and steady the nerves before Le Crunch.

As for the game itself, the French forwards got their team on the front foot early on with the English not helping themselves by shipping needless penalties. Winger Jonny May, followed Ray Gravell’s seminal advice of “You've got to get your first tackle in early, even if it's late” and consequentially spent 10mins in the sin bin. The English soon chipped away at the French lead with their superior bench making the difference in the end and edged it 19-16. 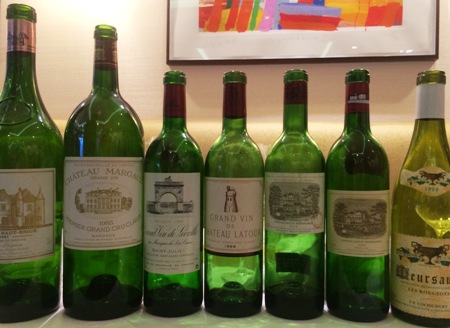 I started with a rugby quote, so I’ll end with one too: “Remember that rugby is a team game; all 14 of you make sure you pass the ball to Jonah.” (fax to the All Blacks ahead of the 1995 World Cup Semi-Final).

A cracking day, with brilliant wines and excellent company. See you in Paris next year!