If Bacchus had to choose Somewhere to Live out his Days, I’d argue that he’d choose here…

"Other shippers may excel from time to time, but Taylor’s proceeds at the head of the pack year in, year out. This consistency is achieved through an extra level of density, concentration and sheer class.”
Jancis Robinson MW

Last year I wrote that I had lost my heart in the vineyards of Quinta do Noval, well, this year I think I left a sock in the Lagares at Taylor’s Quinta de Vargellas…

Often described as one of the most prized vineyards in the entire wine producing world, Taylor’s Quinta de Vargellas did not disappoint - It was one of the most beautiful places I have ever visited, not to mention its ability to make consistently top quality Ports. It was a trip I will cherish forever.

As Michael Broadbent succinctly put it:

‘Taylor’s holds a prime position. I have often described it as the Latour of port, implying strength of character, sturdiness, capacity for long life.’ I agree wholeheartedly.

Our trip started with a tour around Taylor’s lodge in Vila Nova de Gaia which traditionally houses their oak-aged Ports. It really was some spectacle to see so many barrels stacked with such pride holding wines which may be laid to rest there for decades in quiet reflection… 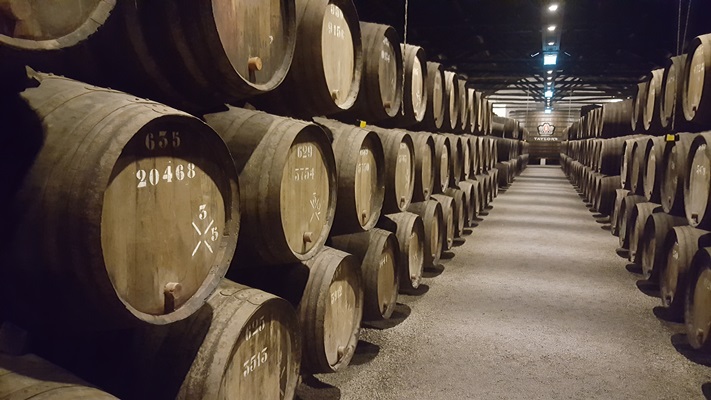 A night at the Yeatman Hotel was the only way to follow such a spectacle. The hotel is Adrian Bridge’s ‘baby’ and is now ranked as one of the top hotels in the world. Suffice to say, one of the most comfortable night’s sleeps I’ve ever had. Adrian confessed to having ‘test slept’ on several of the mattresses over several months – some dedication and certainly says a lot about the man in charge of such a legendary property.

Early the next morning we began making our way up the Duoro Valley, weaving our way through the inexplicably beautiful and manicured slopes. Our first visit was to Croft’s Quinta da Roeda; it reminded me of Tuscany in its beauty but with greater magnitude. We were given the tour by a man who needs no introduction - David Guimaraens - a chap who lives and breathes port. It is without a doubt his experience, skill and passion that gives the Taylor’s Fladgate group such an edge. 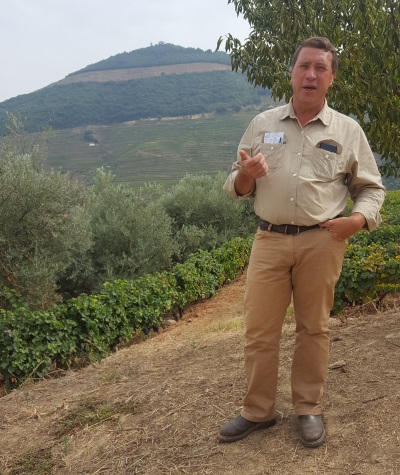 Interestingly, David spoke of how mountainous and extreme the conditions are in the Douro. It might be tiny in comparison to other wine-producing regions but there is huge variation in soil, aspect, everything. Vintage Port has certainly adapted to this viticulture and reflects the character of the varied terroir.

In the past, Phylloxera, which ravished the vineyards, was looked upon almost as a catalyst for improving the Duoro vineyards. Estates were given a clean slate if you will, to research clonal selection, re-organise the vineyards and inject some well needed methodology into their viticulture. In the ‘70s there was a shift in balance as more control was handed back to the estates. One of the most significant strides forward was the singling out of individual varieties in the vineyard and the ability to spot superior ones amongst the more traditional ‘field blends’. This allowed for the creation of ports with greater consistency and quality even in ‘lesser’ vintages.

Port makers, now, therefore, are coming to terms with the fact that they were perhaps too selective in the past and the lesser understood field blends actually create ports greater than the sum of their parts. The point I want to make is that the viticulture in the Duoro is far from standing still; it is constantly moving forward and on the hunt for perfection.

A beautiful lunch at Fonseca’s Quinta do Panascal and catch up with Adrian Bridge lead us onto our visit to Taylor’s Nogueira winery where, In addition to making wine from the produce of its own quintas, they also purchase grapes from estates owned by its partner grape growers.

The winery itself is one of the most advanced in the Douro Valley and its warehouse home to a sizeable number of casks destined for some of the greatest Tawnies in the region. Energy wise, from memory, they are self-sufficient and even during our tour the spray machine was in action maintaining the very specific humidity levels required. Adrian’s passion for sharing the story, the innovation and the winery’s future path is hugely infectious and you can be sure that as an ex-military man (winning the Sword of Honour at the Royal Military Academy Sandhurst no less), what he says, goes.

From here we made our way to Quinta de Vargellas but this wasn’t before we made a short stop high on the ridge with the most spectacular panoramic views of the steep, terraced vineyards. A few snacks and the classic ‘chip dry and tonic’ awaited us… Oh mon dieu! If Bacchus had to choose somewhere to live out his days, I’d argue that he’d choose here… 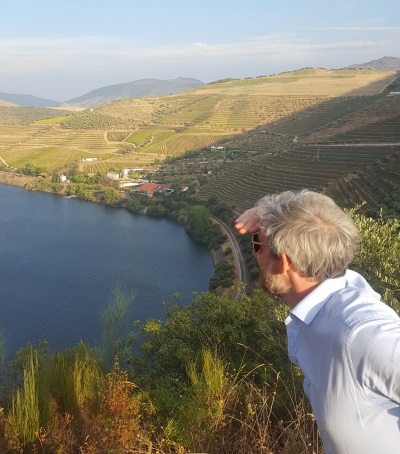 On arrival I was met by the most charming Lieutenant Sharp who was closely followed by Alistair and Gillyane Robertson who have the pleasure of staying at Quinta de Vargellas when not in Oporto. Chip dry and tonic was served outside to the particular recipe of Gillyane with crisps and almonds following in hot pursuit… Gillyane was adamant they both be eaten together – bravo for the combination!

Glasses were topped up in the retiring rays of the afternoon sun and conversation flowed as our sky roof turned to darkness. To this end, it is interesting to note that there is zero light pollution, noise pollution or air pollution here. Supper, too, was al fresco; the food was fantastic and the wines brilliant.

Then, just as the previously decanted magnum of 1977 Taylor’s came round for the second time, we were quickly ushered out and asked to slip into something a little more comfortable…? It quickly became apparent that this was for grape treading… Yes, this really does happen…

So off we went and it is safe to say it was astonishing to see Adrian not only jump in, but jump in with the same excitement as a mere tourist who might be doing it for the first time. Gillyane (kindly?) took a few pictures of the performance for keep sakes… 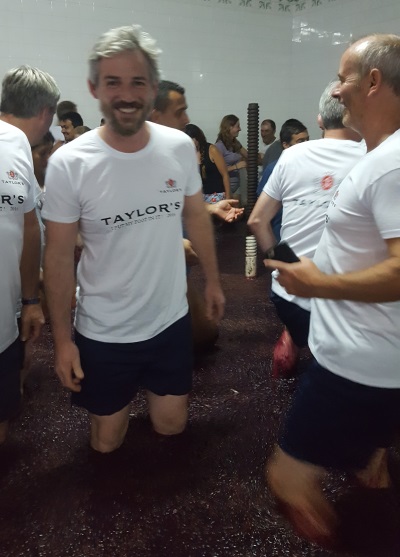 After a rather strenuous 30 minutes (these guys and gals have been doing it for several hours!) we washed our feet and made our way to the lit pool for a few buckets of chilled Taylor’s 20 Year Old Tawny and some homemade cake. The conversation continued for a few more hours with one of the questions posed to Alistair:

‘Is the treading of grapes just for the tourists?’

Rather quickly, he responded:

‘it would not be financially viable to do this just for gimmicks, it is our tradition and it has proven success, if something new comes to light and carries out the same exercise to the same degree then we would be fools not to investigate.’

It was at that moment that Lieutenant Sharp returned from a late night amble and it was clear to us all that his bed was calling and, as he was just up a few flights of stairs, I was asked if I could carry the old Lieutenant to bed. An odd request perhaps? But Lieutenant Sharp is in fact a rather mature Labrador who has seen a lot, witnessed many people coming and going from his Domaine and, most importantly, has seen some of the most spectacular vintages of Port declared and consumed under his watch…. So who was I to say no?

So with the bucket of Tawny emptied and the witching hour fast approaching, we thought it best to have one more bottle of Port. This time, though, we opened it up with port tongs... Oh yes, I have found my new party trick… Or at least until I injure myself showing off late at night.

Anyone who has had the honour of visiting Quinta de Vargellas or meeting Alistair and Gillyane Robertson will understand just what spending time at this great place means. It is safe to say that the future of the group is in incredibly good hands and it was an absolute pleasure to sit next to Adrian at supper and ‘chew the cud’. 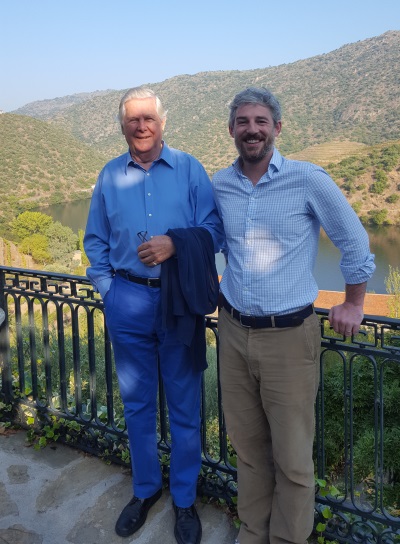 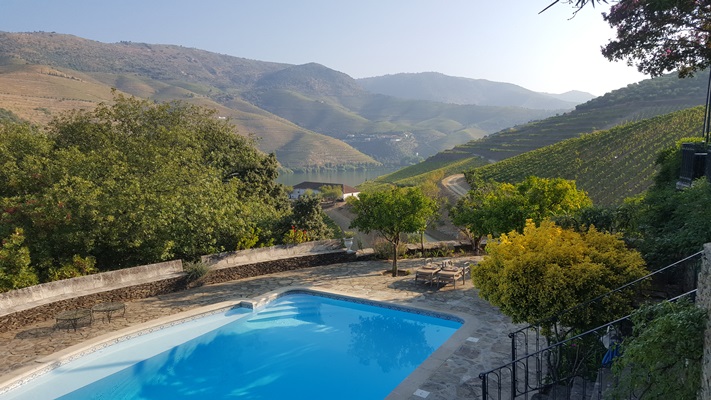