When I first started out in the wine trade Burgundy’s 1999 vintage was its most recent ‘vintage of a lifetime.’ It was the benchmark or point of reference for me to work from. A bumper year for quality and quantity , with both reds and whites excelling, it was an easier vintage for a still wet-behind-the-ears wine merchant to understand. It was a vintage however that would always be on my radar. Fast forward to 2009, with various ’10 Years On’ tastings and a lot of chatter suggesting that the ‘99s are still quite shut down and dumb, didn’t diminish my interest in them. I’ve had a few encounters with various ‘99s in recent years but never the chance to taste them in a structured or comprehensive manner. Cue, by chance, an invite from a much-loved and generous collector and that desire would be fulfilled in a 1999 Burgundy dinner par excellence.

But enough of that, let’s get on to the wines.

We kicked things off with 2004 Vintage Krug. Fresh but surprisingly open and generous, even at this early stage, thanks to its extra dollop of Chardonnay, the ’04 is the final vintage in a unique trilogy for Krug, after the rich, ripe ’03 and stupendous ’02. Reminds me a lot of the ’98, a vintage that has been open for business since its release but has many more years ahead of it. A fantastic way to pucker up for the Burgundies to come.

A brace of Lafons to kick things off. Neither of which show any signs of premox for me, so we are off to a winning start already. The Charmes is plump, rich and friendly, the Genevrieres a little more aloof at first but in possession of an irresistible kick of minerality on the finish. As it begins to open up it is clearly a more serious wine than the Charmes, although the sheer radiance of the Charmes is hard to resist. A cracking start to the evening.

Onto our first flight of reds. I’m a self-confessed Dujac nut, so there will always be a hint of bias from me but boy is this a stunning glass of wine. Beautifully pure, unadulterated red fruits on the nose and irrepressibly fun to drink. My goodness does this family know their way around these vines. Stunning. In total contrast, the Clos de Tart is much darker in colour and a silent, brooding foil to the exuberant Dujac. The power, intensity and concentration are all there. The question of if, or when it will be ready, dominates the table, but the depth that this wine is famous for is quietly lying in wait. One to watch.

Onwards now to Gevrey, with a Grand Cru in all but name(?) alongside a Grand Cru proper. Much like the Dujac, the CSJ from Rousseau is already open for business and also like the Dujac this is a wine that shows a winemaker in total mastery of his vines. Brimming with bright red fruits and a faint hint of forest floor, the palate is so well balanced, with fireworks of summer fruit woven into a supple, mouth-filling finale. Delicious. The Chambertin from Charlopin meanwhile is muscular and broad-shouldered. Dare I say, a little four-square, at least alongside the Rousseau. A lack of frills however allows one to see the extraordinary depth and power that this hallowed vineyard is capable of.

I try and curb my instincts for an enthusiastic four letter expletive at these kind of dinners but these two wines are both of the “Holy S**t!” variety. We are really moving through the gears now. The Meo is so exotic, with a velvet-like texture, dazzlingly spice and a wild, chocolately finish that just goes on and on. What a wine! The Leroy meanwhile soars from the glass. Utterly hedonistic, though just when you expect it to give you everything, it just pulls back. A real temptress of a wine. Which is better? Who cares. If you ever find yourself with a glass of each in front of you, the Wine Gods must be smiling down on you. The sheer beauty of these wines cannot be overstated. Both are constantly changing in the glass. Fantastic, with a capital F.

There is something a little daunting about tasting or drinking Musigny. It is one of the most complex and beguiling wines in Burgundy. Very interesting to place this flight after the Richebourgs but I think in terms of the intellectual progression through these flights it is bang on. The Drouhin is out of the blocks quickly in terms of aromatics, the Mugnier is a little more shy. Both are hauntingly pure with mind-boggling depth. The Drouhin seems to fall more into the exuberant, exotic field where as the Mugnier feels a lot more correct. The energy and drama of the Mugnier is really special. The delicate persistence of the fruit on both is something so unique. I’m left scratching my head…in a good way. 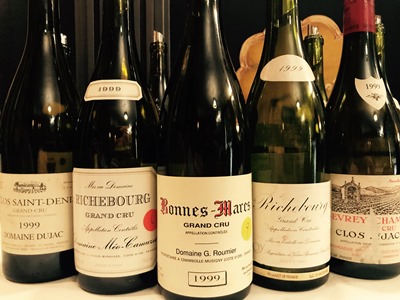 We are being seriously spoilt here. In any other dinner the Dujac, or even the Rousseau would have vanquished all around it. For some of the guests around me the brace of Musignys represent the summit but hang on, we are about (to quote Allen Meadows) ”to be transported.” The nose on the Roumier is astonishing. Black cherries, a hint of rose petal, slightly animal, almost meaty notes bellow from the glass. It’s absolutely intoxicating. The palate is equally full throttle. Gorgeous, sappy fruit and layer upon layer of shape-shifting spices, all held together by the silkiest of tannins. Allen Meadows once described this wine as having a real “presence.” He’s nailed it. Wow!

Heartbreakingly the DRC has a slight taint to it. VA? A hint of maderization? There are a few whiffs of what this wine can do when on song and certainly texturally the palate is all there. This was purchased en primeur, with every other bottle from the case giving an A-1 account of itself. What’s that saying about there only being good bottles? Still, it goes to show the quality at this most famous of addresses, when a slightly tainted bottle is still delicious and holding its own in some pretty exclusive company.

We finished the evening with 1969 & 1996 Dom Perignon. Sadly the ’69 had seen better days but it’s always fun to check in on old bottles of Champagne. The ’96 for me is right in the zone though. Still fresh a daisy, with lots of bright acidity but now both rounding out and filling out well. If you’re sitting on some ‘96s, it is well worth checking in on them. More on that though in my next blog.

In summary of the 1999 vintage for Burgundy then, I would say that it absolutely lives up to its reputation. Albeit a slight taint to the DRC, all of the wines in this lineup are rocking with a long and exciting journey ahead. If you are sitting on stocks of the ‘99s, then rest-assured that you are in possession of some incredible wines.

A huge thank you to our generous host for this dazzling lineup and maestro-like pairings. One of the greatest Burgundy dinners I’ve attended. 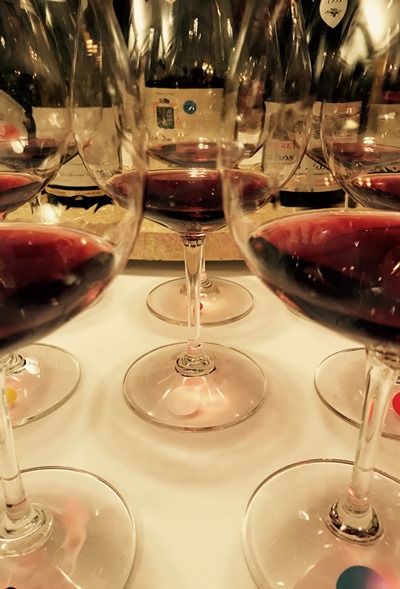