Seeing out the year with Latour

Few estates can garner the admiration and adoration enjoyed by Chateau Latour. One could be forgiven for thinking that given their location, set so far back from the D2 and accessible only through a secure gate, and their self-imposed-exile from the En Primeur system since 2011, that they might be a little aloof, a little ‘too-cool-for-school’. Nothing could be further from the truth. We collectively greet each other like old friends and have been known to share some exceptional bottles over fabulous meals together; and our most recent, just a few days back, was no exception.

Within the grand surroundings of 10 Trinity Square’s private club, formerly the home of the London Port Authority (“those boys did live well” quoth our great leader Mr Boom), lies the Chateau Latour Discovery Room. Home to a comprehensive collection not just from the esteemed slice of Pauillac dirt but also from the other estates in the group (Domanie d’Eugenie in Burgundy, Araujo in Napa and Chateau Grillet in… Chateau Grillet) this is a bespoke facility which takes the best of the building’s original extravagant Beaux-Arts carved panellings and combines them with state-of-the-art glass wine fridges and clever lighting to make a warm but classical atmosphere. The food is pretty sound too having come from the next-door restaurant ‘La Dame de Pic’, home to the only French female chef to be awarded 3 Michelin stars, Anne-Sophie Pic. 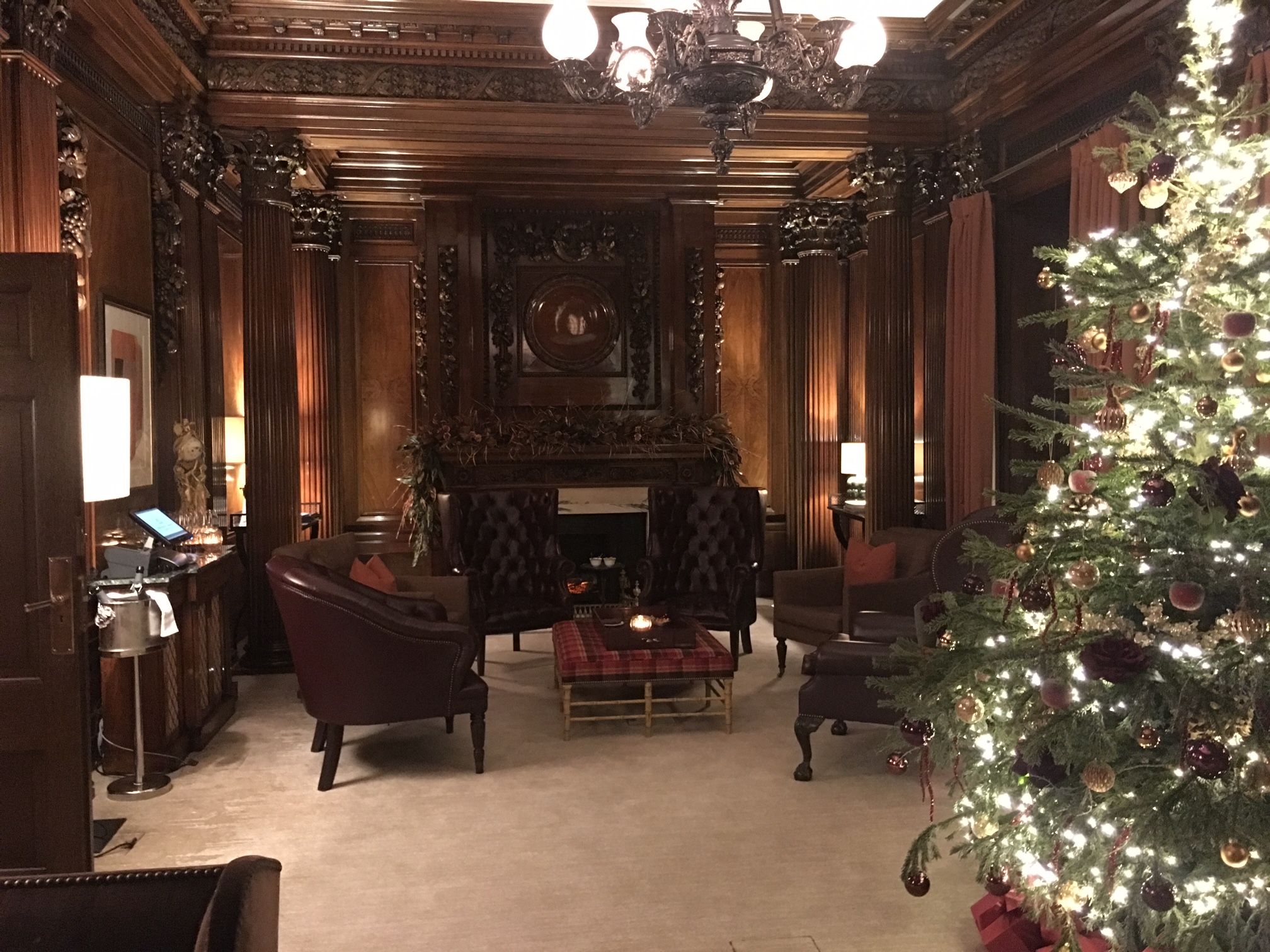 We greeted our guests in the sumptuous former office of the Chairman of the London Port Authority, which was replete with a rich Christmas tree and enviable views over the Tower of London and Tower Bridge, both lit up in festive splendour. The ice was broken with a  few bottles of the rich, chalky Blanc des Millenaires 1995 from Charles Heidsieck – but the main event was waiting for us in ‘the canteen’.

Frederic Engerer (General Manager of Artemis Domaines, Latour’s wine-focused parent group) had personally selected a range of vintages for us to share, shipped direct from the Chateau’s cellars and handled expertly by the club’s Director of Wine Jan Konetzki. Needless to say Frederic was as genial, honest and passionate a host as one could hope for: never so gushing that his words felt artificial but nonetheless so intensely proud of his ‘babies’ that his enthusiasm worked its magic even on a crowd of well-heeled Latour lovers. 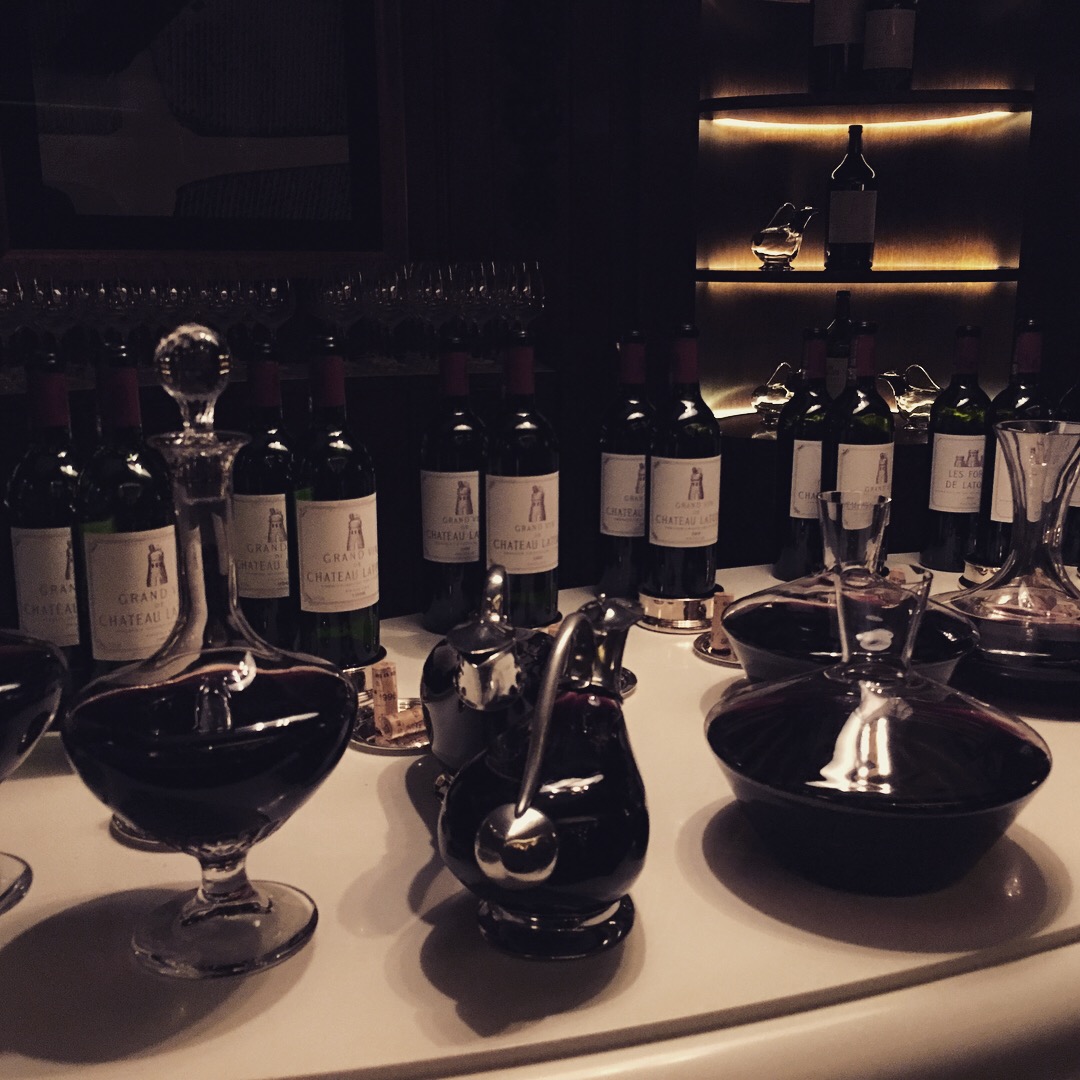 The only way to guarantee that nobody in the room at a BI event has tasted one of the wines before is to serve one that has never been released. 2012 was the first vintage after Latour’s departure from the En Primeur system and this is a vintage of Forts that is already showing the nuances of its own particular plot within Latour’s vines. It’s worth mentioning once again that Les Forts really is not a second wine – it’s a single vineyard estate wine in its own right – and when considered as such it’s really very good value. This 2012 is surprisingly open for business with its distinct whiff of graphite and pencil shavings, pure blackcurrant and plum fruit, and a palate of great precision and linearity. It may not make the oldest bones but as a wine to drink over the next 5-10 years it’s simply delicious. 93+ pts

Hmm. A 97RP Les Forts? Can such a thing be realistic? The answer is emphatically ‘yes’. This proves to be one of the wines of the night, and trust me as you will read it’s up against some stiff company. Frederic tells us that not only is it the best Les Forts he believes they have ever made, but that it compares favourably with relatively weaker vintages of the Grand Vin from 20-30 years ago. He quite rightly has to be a little cagey about this as he is protecting the image of the Grand Vin but personally I think he undersells the immense quality of this Les Forts. Even with a 2+ hour decant it is so tightly wound and brooding in the glass, all primary fruit and mocha, before slowly unfurling with time and showing true Latour-esque characters of graphite, wood shaving, and even the merest hints of truffle, baked earth, white chalk pebbles. But it’s the weight and power and precision in the mouth that is so impressive. This is at least 5 years from ready. And will drink for decades. Buy. 96+ pts

Another interesting pairing in that as with flight 1 the younger wine is the one you would default to for drinking now. The 2006 is a tricky beast, with quite distinct tannic structure and a nicely maturing flavour profile. Coming to this straight from the 2010 Forts is a curious experience as there is really no let-off in quality: the foot stays flat on the accelerator. The difference here is that the core of the palate has started to break down nicely into more distinct, defined parts and as such is both a little more complex and yet a little easier to drink. We’re spoiled rotten when you realise that this is ‘the weakest’ of the wines we will drink tonight and yet it’s utterly delicious. 94 pts

Well tie me to a chair, slap me with a fish and call me Susan. Every time I’ve had this wine it delivers yet greater translation of the Latour terroir. The acidity becomes more focused, the structure more crisply defined, the fruit more succulent and the palate more driven and energetic. It’s just brilliant. The only problem is that it’s still not really ready. As Frederic said, we are starting to see more and more cases opened and bottles starting to be drunk, but in truth what you should take from this observation is the cue to start loading up and sitting on it. Start opening it in 7-10 years and then revel in how much it’s appreciated (in both senses of the word). Mesmerising. 99 pts

My wine of the night. This is just drinking like a dream. Imagine taking the austere elegance of Latour and adding supple, smoky richness and a textured mid-palate that makes you weak at the knees. This is the Marilyn Monroe of Latour, sexy and unabashed but with hidden depths and talent to burn. The fruit is so pure and rich and yet the acidity so vital that everything is held in check and it never goes over-the-top. Many of us around the table, including hard-core aficionados, are in awe at this point. Is it the best wine of the night? Probably not. Is it the one I want to drink until I can’t see? 100%. 98 pts

Here’s a fascinating contrast. This is Latour personified: austere, gracious, bespoke-tailored, charming, deep, precise, reliable, aspirational… it has it all. The folks among us who value this classicism are deferring to this over the 2000, which is admittedly far less typical of the estate. The mineral purity is quite astonishing, the backbone of tannin so fine and yet so firm, the acidity so clipped and trimmed. The fruit character has settled into a delightful blackcurrant and plum compote with cep and truffle just starting to come through. The finish is so long and there’s a lovely peacock’s tail at the end, a savoury tang, which reels you back in. I’m still for the 2000… just. 97 pts

So the great moment arrives and the legendary 1982 takes its place on the oche. And guess what? It’s a 9-dart finish. The central core of this wine must be in some kind of protective forcefield, such is its utter refusal to accept or display the process of ageing. That core may be receding but given the wine is 35 years old the freshness and purity of that densely-fruited mid palate is just ridiculous. Add to this the beautiful, gentle maturation that encircles it, replete with black truffle, dried porcini, game stock, warm earth, wet gravel, and you have a wine of astonishing completeness. The third bottle I have had in 6 years and it hasn’t budged an inch. 100 pts 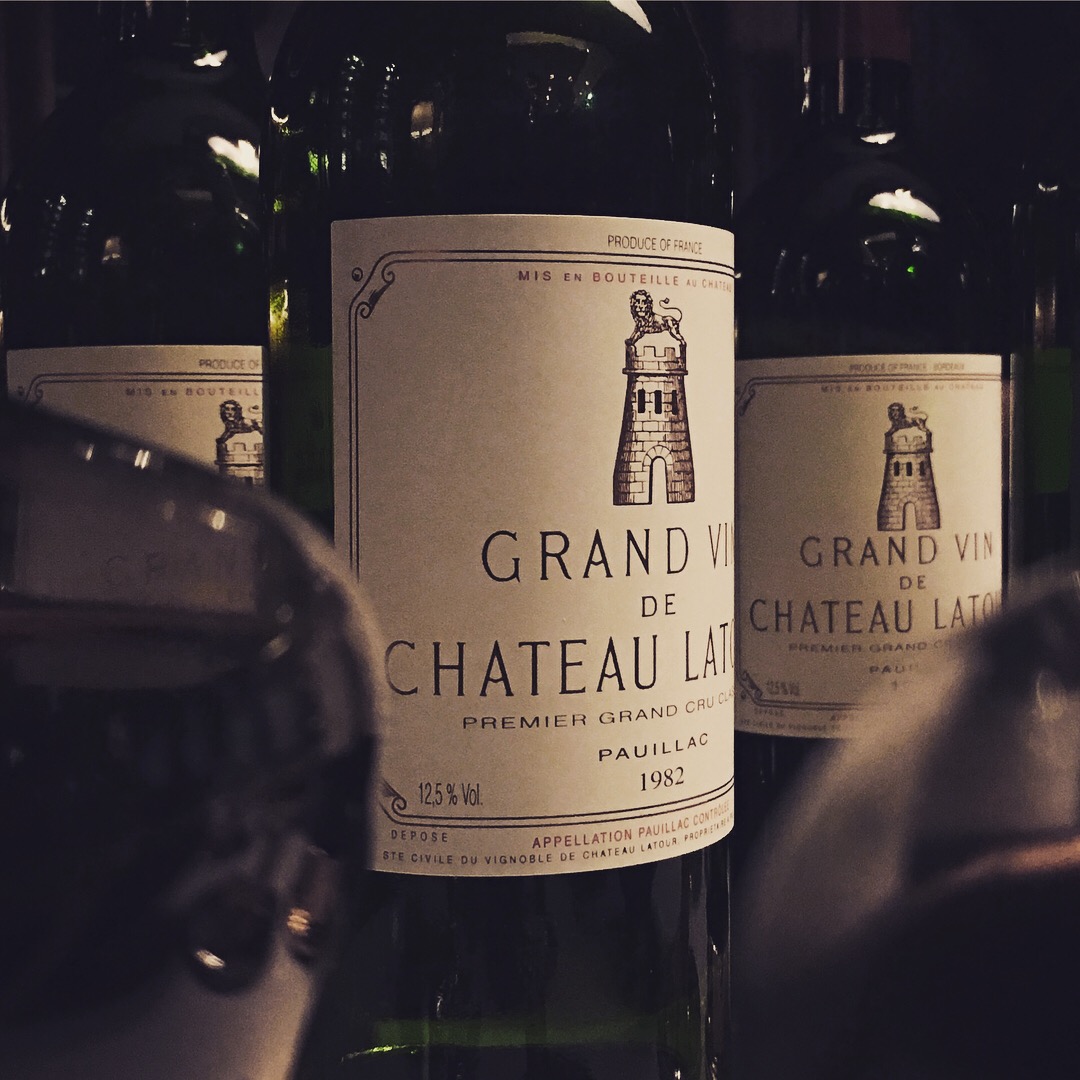 
Blind tasting is such a stupid game. It’s great for training your palate, but putting yourself amongst it in a crowded room of experienced wine-lovers is daunting and usually leads to humiliation. This time the humiliation was mine for entirely self-imposed reasons: I simply didn’t have the guts to cry out ‘1964’ even though so many signs were pointing towards it (and this is as much to do with reading the situation and the individuals concerned as much as identifying the glass’s contents – blind tasting is like Poker in that you play the man as much as the cards). When it was revealed as 1964, obviously my post-announcement claims of ‘I knew that!’ quite rightly fell on deaf, if not rather unkind, ears… and I had nobody but myself to blame. That’s how blind tasting works. You either put up or you shut up. 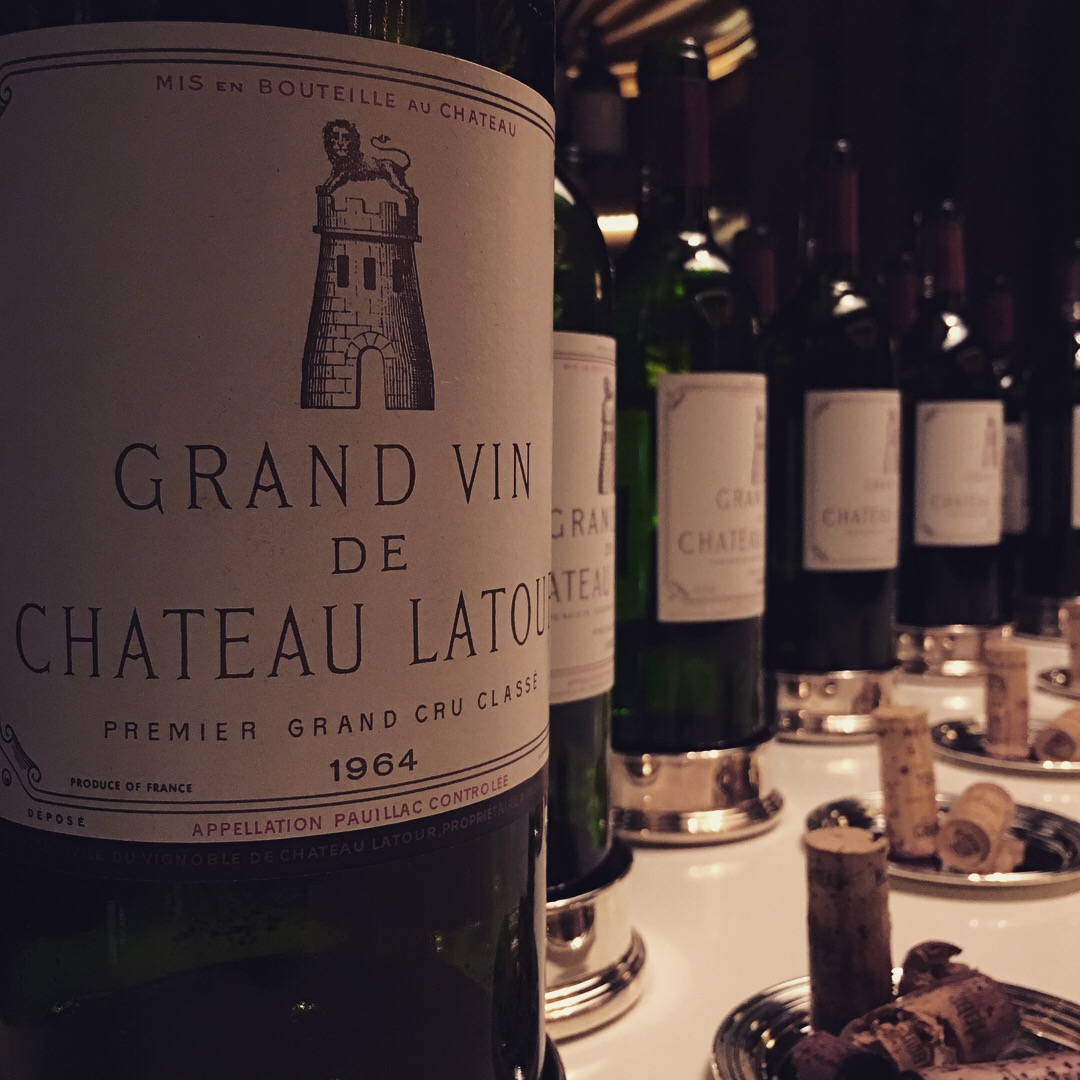 But the wine, the wine, the WINE! Well well. At 53 years of age it remained completely in control, evergreen, effortless, extraordinary. Much like the 1982 it had retained a nucleus of rich, ripe fruit which was holding on, glowing within the body of the wine. It was smaller, tighter, and surrounded by more tertiary characters, but certainly there. The colour was almost indistinguishable from the 1982 despite the 18 year age gap between them. Being from magnum definitely helped but there is no question that this an exceptional Latour. 98 pts

Huge thanks to Frederic and the team at Latour for organising such a memorable evening. 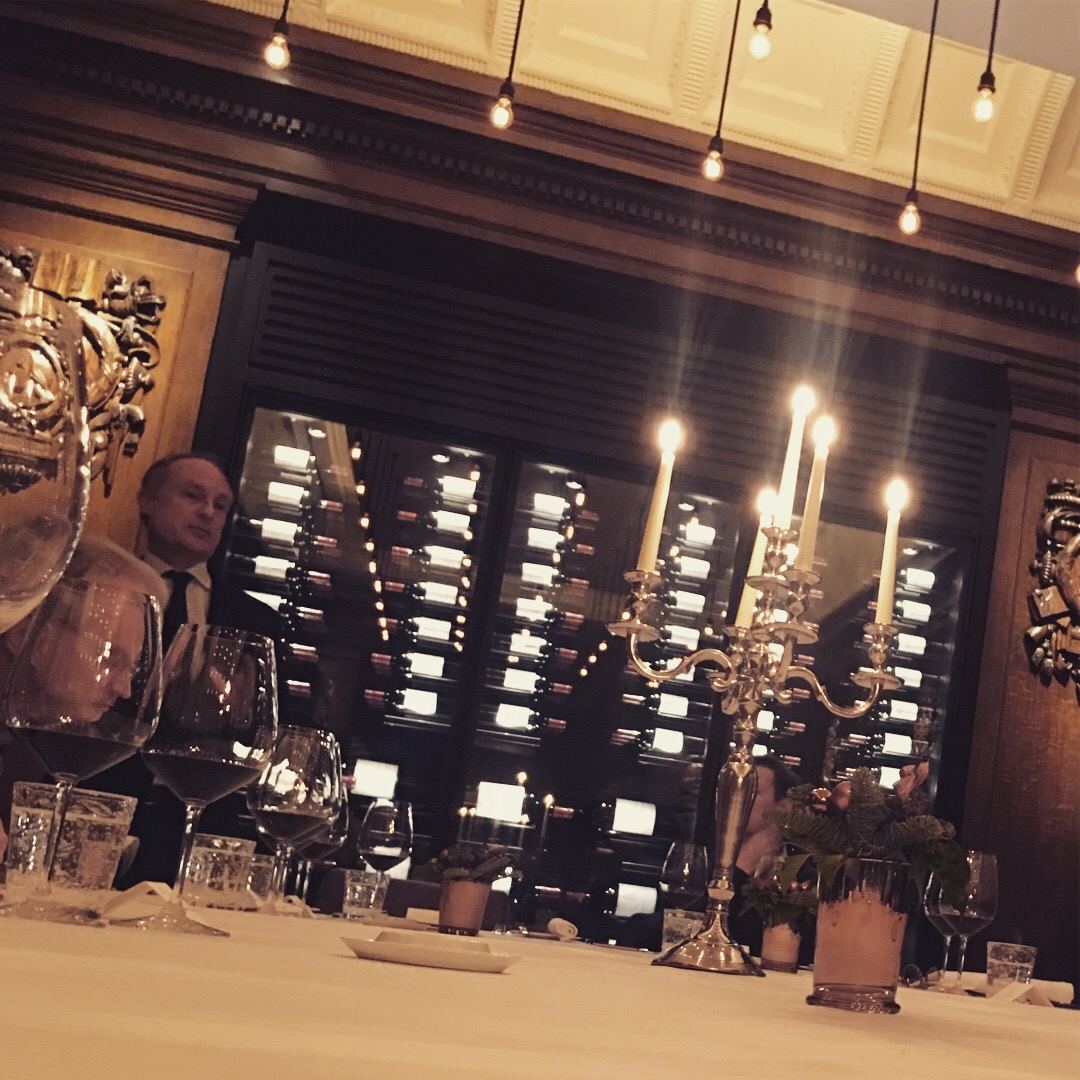