Ever since the first time I saw that iconic match-cut shot of the bone club juxtaposed against an orbiting satellite, Stanley Kubrick’s masterpiece ‘2001: A Space Odyssey’, has thrilled and fascinated me. I must have watched it at least twenty times now. I’m pretty sure a good ten of those viewings were at university, “expanding my mind” when I should have been studying. A groundbreaking film in so many ways, from the themes and ideas it explores, to the production design, special effects and the classical music soundtrack (and what a soundtrack that is!) 2001: A Space Odyssey was a science fiction movie that broke the mold. It remains outside the mainstream, thought provoking, full of talking points, much like one of my favourite vintages in Burgundy…..yes 2001.

Sandwiched between 1999 and 2002, Burgundy’s ‘01 vintage was released without a great deal of fanfare. It was labelled a “winemaker’s vintage” that merchants really had to hand-sell to clients. Just imagine that now in today’s red hot Burgundy market? Until recently too (though there are exceptions) the ‘01s have, as a result, always carried plenty of value, relative to their more celebrated peers such as ’99, ’02, ’05 etc. And so a group of us gathered for another exceptional Burgundy horizontal, following on from last year’s 1999 extravaganza (https://www.biwine.com/blog/post/502) to check in on a few of these ‘01s.

I’ve come to appreciate more and more the importance of how the flights are paired and ordered for great horizontals such as this. Believe me, it is not as easy as you might think. The ’99 dinner was orchestrated quite brilliantly and with the same host-come-conductor, directing proceedings again, there was no doubt we would be in for something special.

After whetting our whistle with some deliciously high-toned Jacques Selosse Rosé, we strapped ourselves in for our very-own 2001 odyssey …

A totally contrasting pair of Corton Charlies to begin with. The Faiveley, incredibly restrained on the nose, slightly medicinal. Much more alive on the palate, with a crazy, spiced-apple finish. Very impressive length and totally exotic. The Coche meanwhile, positively soars from the glass. Holy Moly. The nose is insane; baked apple, slightly smoky and very deep. The freshness and balance is really something to behold. Changes through the evening, into a richer, denser, butter-scotch kissed masterpiece. Archetypal Corton. According to Mr.G; “If an alien came to earth and asked me what Corton Charlemagne was, I would give him a glass of Coche Dury ’01 and tell him to drink it.” – I believe that particular scene was from the ‘Director’s Cut’ of Stanley Kubrick’s film. 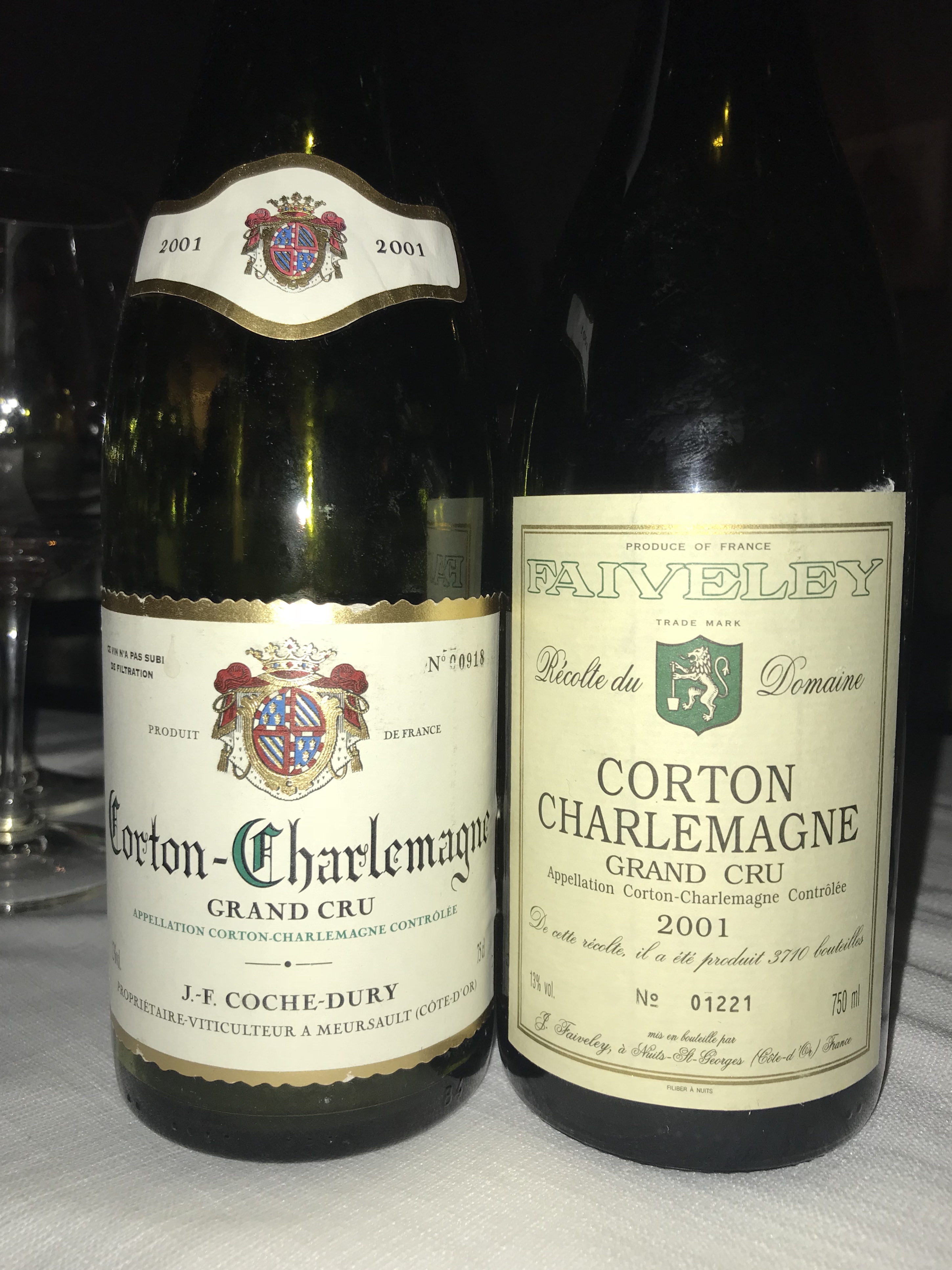 Ooh, these two are quite different too. The Clerget has a lovely purity to the nose but doesn’t unfold as such on the palate. A little dusty and disjointed. Rustic tannins and a little chewy. The Rouget meanwhile moves through the gears effortlessly. Wild strawberries on the nose, beautiful texture on the palate. Lovely sweetness on the finish. Beautiful to drink now. 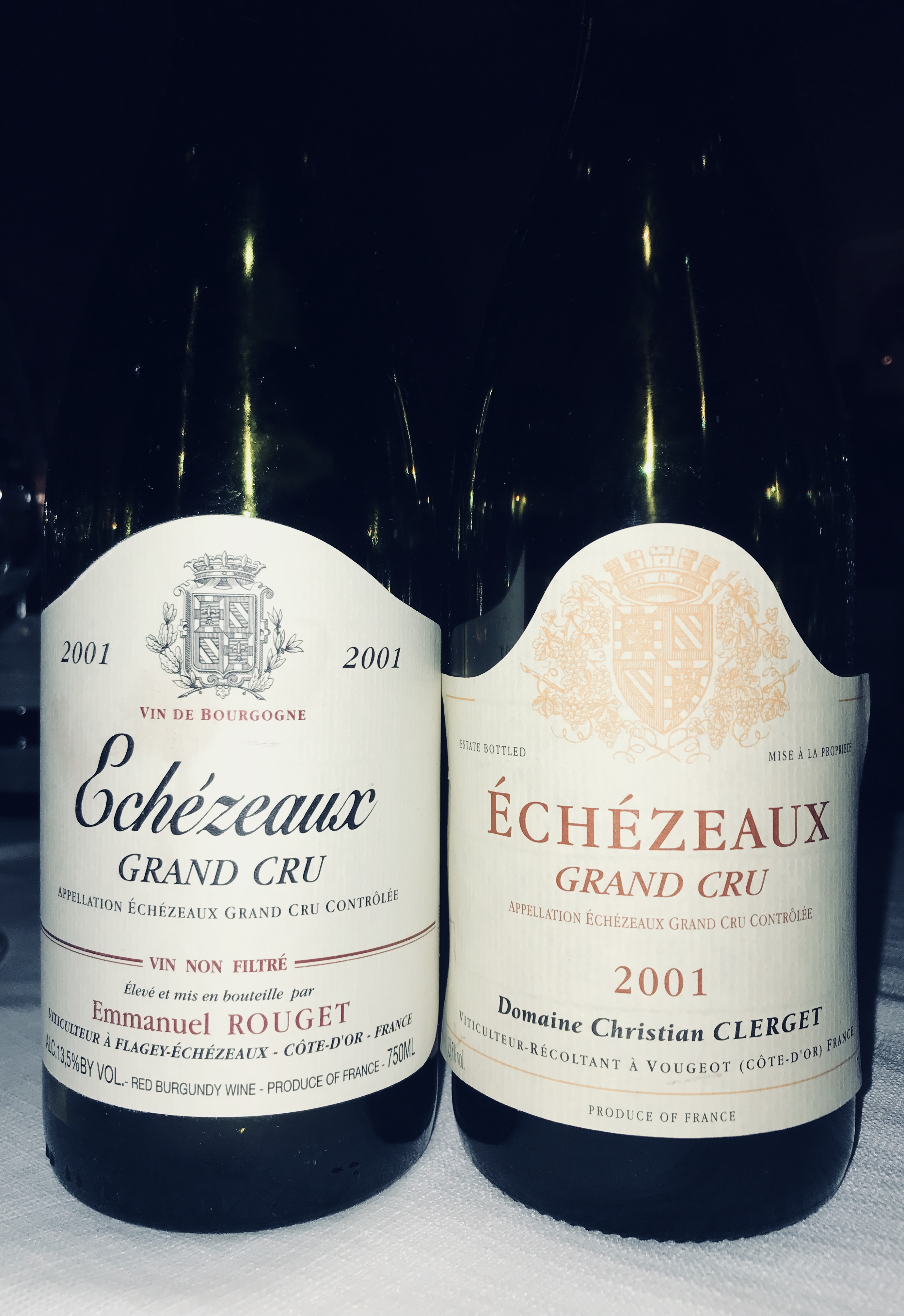 And who doesn’t love a Ponsot interlude?  Huge nose. Packed and stacked. A definite notch up in power from the two Echezeauxs, although lacking the sleek beauty of the Rouget. This is a wonderfully constructed wine nonetheless. Very youthful and primary still, with layers of fruit, held firmly together with precise tannins.

Our great conductor has pulled together a jaw-dropping four movement symphony of Richebourg here. Wowzers! The nose on the Grivot is quite stunning. A little firm on the palate and still very youthful and primal, the fruit is amazing though. The bar for this evening’s reds has been set. In contrast the Hudelot Noellat is a little wilder and rustic on the nose, a slight taint perhaps? Who cares though as it’s positively delicious on the palate. Great depth and just good old fashioned fun to drink. The first whiff of the Meo and we are transported to a higher dimension altogether. Staggering, just staggering. The purity and precision is insane. So perfect, one of the most precise wines I’ve ever had. From the first sniff to the last sip, it’s so in line. But hello, the Leroy has a thing or two to say about that. The nose doesn’t just soar, it positively swaggers out of the glass. Outrageously flamboyant. The texture is mesmerizing, this wine does not stand still for a minute. An inter-galactic, extra-sensory Richebourg that only Madame Leroy can produce. 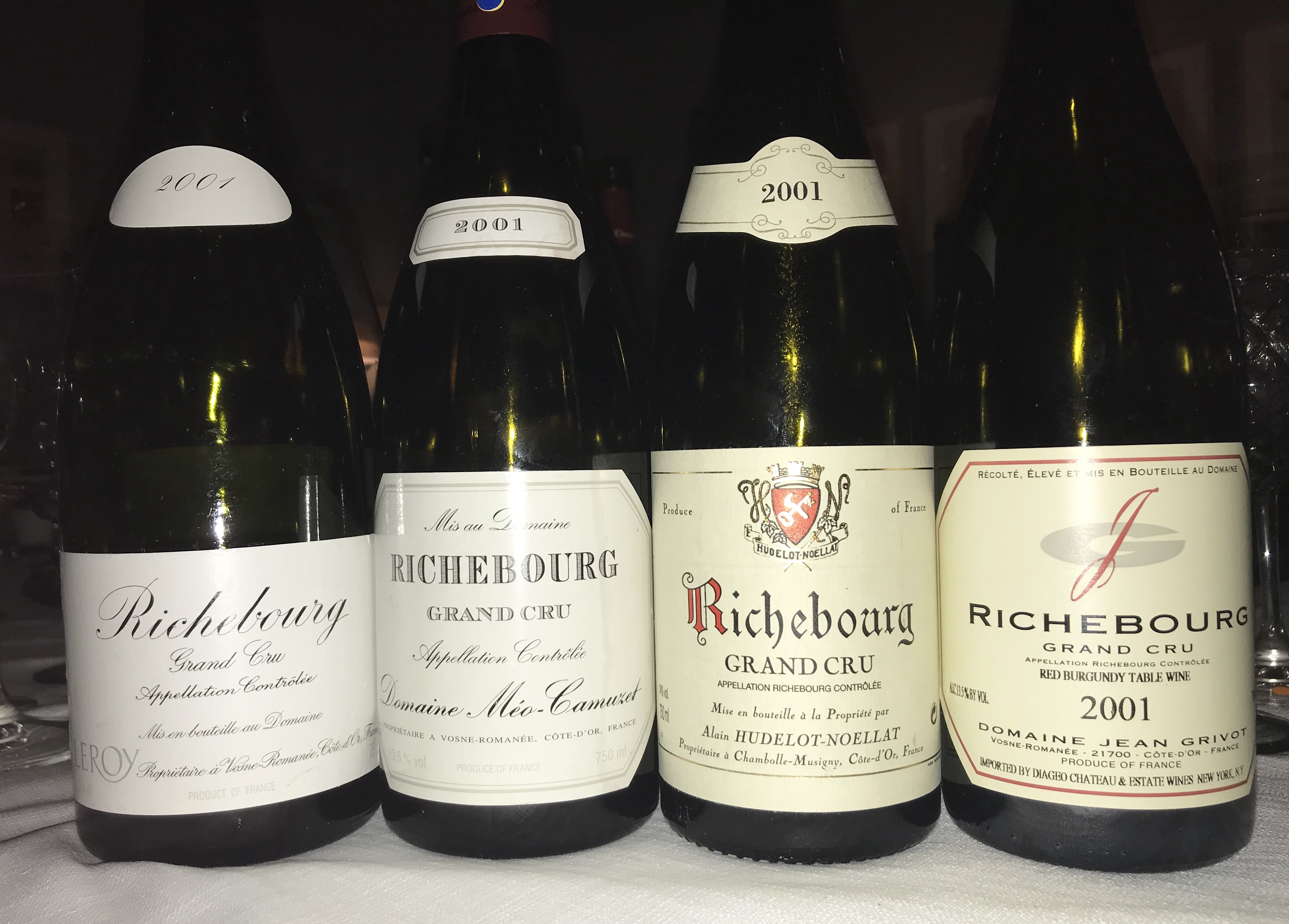 Where do we go from there? To the constellation RSV of course and yet another contrasting brace of wines. The DRC’s nose is utterly seductive. A little less swag compared to the Leroy we just tasted but has the same level of radiance. A seamless movement to the palate, where it skips and dances to the DRC drum. Beautiful high-toned red fruit, so silky. The Arnoux feels altogether more serious. Greater depth and intensity on the nose. Ooof this is a very, very good glass of wine. There’s a real sense of authority to this RSV. The DRC merrily leaps around care-free, where as the Arnoux is very much straight-backed and leading us on its waltz. So complex and just unending depth.

If there’s a wine that can bend space-time then it has to be Musigny. The Mugnier is just magical. I thought I knew what “haunting aromatics” meant until I sniffed this. Takes you to places where other wines can’t. Simple as that. The texture and mouthfeel is perfectly spherical. Musigny is one of the most intellectually challenging wines but when it’s on there is an unbridled joyousness to it. This Mugnier has it in spades. Delicious. Thumping along like a timpani drum, the De Vogue is a much more brooding and powerful beast. The ‘Also Sprach Zarathustra’ (you know this piece of music; daan, daaan, daaaan, DAAN-DAAN, bom-bom, bom-bom, bom-bom, bom-bom) to the Mugnier’s ‘Blue Danube.’ It stomps rather than skips. Musigny’s ethereal-like nature is missing here. The complexity is there but his needs a lot of time. Let’s have a bit more of that Mugnier. Wow! 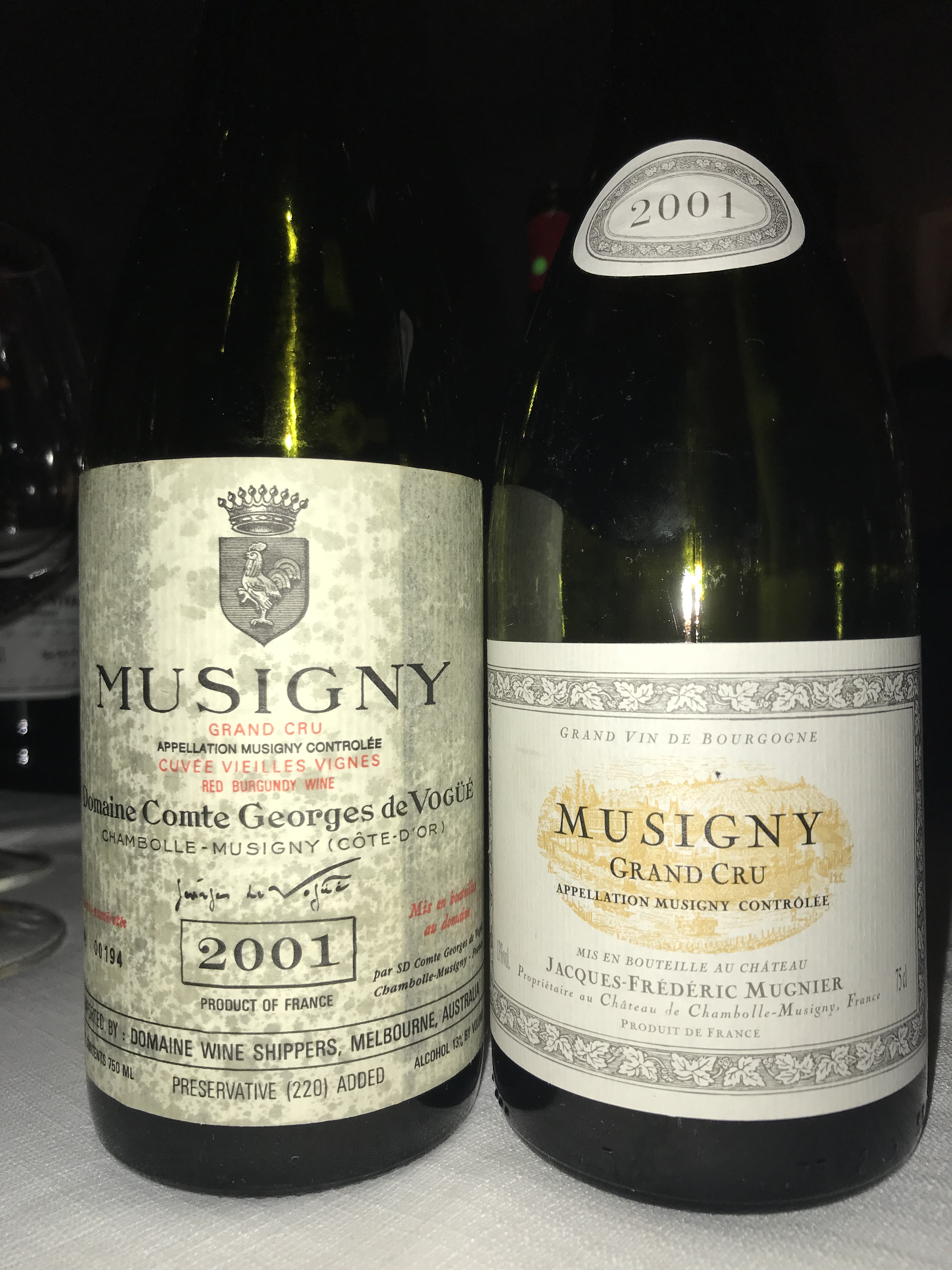 We wrapped things up with a delicious glass of 1983 Wehlener Sonnenuhr Auslese from JJ Prum. Fresh as a daisy and a lip-smacking way to finish a breathtaking flight of wines.

Drawing to a conclusion then on these ‘01s, there doesn’t appear to be any singular thread of theme to this vintage. They are ‘athematic’ (kudos to Mr.P), with lots of different styles, characteristics and at different stages of evolution. What there is however, certainly from this lineup, are three, broad groups, much like the three acts of Stanley Kubrick’s masterpiece: (i) ‘The Dawn of Man’ in which I would include those wines still primal, perhaps unresolved or with potential yet realized, (ii) ‘Jupiter Mission’; producers in full mastery of their terroir, drinking beautifully now but with the potential to get even better  and (iii) ‘Jupiter and Beyond the Infinite’; an elite group of wines that transcend vintage, terroir and producer, taking you through space, time and the ‘Star Gate’ ….to a late night stroll home with a grin on your face. To quote our most generous host, “I think we can all feel quite pleased about this vintage.”

Many, many thanks to R for his extreme generosity on what was an exceptional evening.