A Kind of Magic: The Rousseau Symposium (Part 1)

It’s a kind of magic

It’s a kind of magic

There are few estates more celebrated, loved and respected over the last 30-40 years than Domaine Armand Rousseau. From Tokyo to Texas, the wines have a devoted following across the globe that continues to grow. A domaine with “a feeling of tradition honed down to a fine art” according to Remington Norman and Charles Taylor MW, the Rousseau family, now in their fourth generation, have an enviable record of consistent brilliance.

And so a group of us, all hardcore Rousseau fans, gathered after flying in from various locations to pay homage to the Clan Rousseau with a vertical of arguably their greatest wine, the immortal Chambertin. But first a little history.

One dream, one soul, one prize, one goal, one golden glance of what should be...

The Rousseau story began in the early twentieth century when an 18-year-old Armand Rousseau inherited some vineyards in Gevrey Chambertin. Through marriage and some canny buying, he acquired more vineyards, notably in Clos de la Roche, Charmes Chambertin and Chambertin and made the transition from selling off his wine in bulk to wholesalers to estate bottling his best wines himself. His reputation began to rise and Armand continued to acquire more vines and plots. Armand’s son Charles joined the domaine in 1945 and so began the sequence of wisdom, tradition and philosophy being passed down from one generation of Rousseau to the next.

By the 1990s Charles, who had now been joined by his son Eric, had successfully followed his father’s vision and the reputation of their outstanding wines was firmly established. Charles added more precious vines notably in Chambertin Clos de Beze, Chambertin and the entire vineyard of Clos des Ruchottes. A thriving export business soon followed as the domaine’s  wines could now  be found on lists and in cellars across Europe, the US and Asia.

The love of the vine is central to the domaine’s modus operandi and Eric’s decision to steer the domaine in a more organic direction has paid dividends. Today Eric is joined by his daughter Cyrielle, who has honed her skills and knowledge in Dijon, Oregon and Australia. With three generations of winemaking genius behind her, the future at the domaine is brighter than ever.

The story of Chambertin actually begins with the Clos de Beze vineyard, planted in the 7th century by monks from the Abbey of Beze. It wasn’t until the 12th century that Chambertin came to be, when, legend has it, a local man by the name of Bertin decided to cultivate the same Clos de Beze vines in his own field. And so Champ de Bertin (Bertin’s field) later to be known as Chambertin, was born.

Rousseau’s 2.5ha of vines, the lion’s share of the vineyard comprises of 4 parcels, 3 east-facing and the 4th a north-south parcel at the edge of the woods. Its location and aspect are such that it can only be cultivated using a horse and plough. The resulting wine is unquestionably Chambertin’s finest.

And so to the wines, 13 vintages of Chambertin, a sensory experience more akin to ‘The Quickening’ than a wine tasting (If you’ve never seen Highlander that will make no sense. Sorry.)

There can be only one

The most lovely, dusty auburn colour waves to you from the glass. Great clarity. Really pretty, primal red fruits abound on the nose with superb notes of winter truffle and just a hint of pepper. Elegant on the palate with real purity and poise. This is a charming glass of wine indeed. Very autumnal, with lovely leathery, gamey notes to compliment the still fresh red fruit profile. Ladies and gentlemen: we have lift off.

What a contrast. Great intensity and a little more serious in its self-expression. Quite firm on the palate, lots of grip and a hell of a lot of spice, with ginger-bread notes wrapped around sweet, dark berry fruit. Not a million miles away from an outstanding magnum we shared a couple of weeks ago but fascinating to see two-sides of Rousseau’s Chambertin so early on in this line up.

An arresting, multi-layered nose pulls you in immediately. As fresh as a bowl of mixed berries just picked, sliced and served up at the end of long meal. A gorgeous hint of tea comes to the fore later as it opens up further. While not quite firing on all cylinders on the palate as the ’91 (by reputation) can, its velvety tannins frame a kaleidoscope of berries, currants and spice. A really playful incarnation of Chambertin vs the more serious ’88.

Picking up where the ’91 has left off, this is another dazzling showcase of what Chambertin can be and do. So fresh and youthful but in no way reserved, this feels like it should be the example of Chambertin in some sort of grand cru Burgundy encyclopedia (note to self, copyright ‘The Great Grand Cru Burgundy Encyclopedia’). With time in the glass sweet Japanese strawberries weave themselves around a smorgasbord of exotic spices. The finish is unending. There is a psychedelic ‘Star Gate’ quality to this ’93. Amazing!

Served in between the ’93 and ’99, this is a tough assignment for the ’95. The nose however has gorgeous wild strawberry notes later giving way to some old-school barn yard. A little hardness/greenness to it, the curse of many ‘95s but after 30mins or so in the glass, it melts away to reveal a really charming, slightly rustic but characterful wine. I would love to try this again in a different context.

Is there as gorgeous and an inviting looking glass of wine as this? It’s perfect. So much intensity on the nose with jab after jab of summer berries, pu’er tea and exotic spices hitting your senses like a boxer working on a speed bag. The precision is ridiculous, it is so complete with both a front-to-back sensation of flavours on the palate, coupled with a well-controlled Chambertin explosion that fills the mouth. Still youthful, one is simply left to wonder just how good this ’99 can become?

Bright, dazzling ruby-red colour. Very tightly coiled, with some real power lurking in the glass. Takes a while to open up but my goodness, those floral notes, dates and wild strawberry aromas are to die for. The palate is intense and needs time but this will be a fascinating vintage to follow over the next 5-10 years.

A massive pang of violets and crushed redcurrants greets you on the nose. There is a breeding and confidence to this ’05 that sets it apart a little from just about every vintage so far. It’s depth is astounding and it has a statuesque quality that weirdly reminds me of Latour. Still there is a joyous exuberance to this ’05 and again outrageous layers of flavour that are so fine yet so detailed too. Just when I think I’ve started to figure out this whole Rousseau Chambertin game too. Outstanding, the best ‘house wine’ I’ve ever had.

Arriving fashionably late and thus served as a third wine in a trio with the ’02 and ’05, this is a welcome glimpse back to the future. The nose is utterly intoxicating. Menthol, game, white pepper, red currants, all jostle and dance with one another. Silky and weightless on the palate yet packed with generous, sweet fruits and almost Hermitage-like savoury notes. My neighbour and I are discussing running off with the bottle.

Quite dark and brooding on the nose at first, with a small kiss of kirsch, later unfurling into Korean plum tea-like notes. Fresh yet muscular on the palate, lovely weight and again the length is just epic. This needs time. While it might not scale the same heights as the ’05, this is another majestic vintage for Rousseau.

A whole new gear. Colour, nose, palate are all so radiant. Bursting with summer berries that explode from the glass. The sheer richness and sweetness of the uber-ripe palate just makes you grin from ear to ear. The tannins completely melt into the sappy fruit and spice. I get the feeling that even 15-20 years down the line, it will retain this same hedonistic character. Love it.

A little shy on the nose and still very primal, it’s the texture on the palate that tells you this is a special vintage. Satin-like and perfectly formed, with sumptuous, succulent fruit held together with the most precise of tannins.  It has that similar La Tache like weight/weightlessness as the ’93. Not in most folk’s top 3 of the night but I love this.

Fun, fun, fun…this is a bikini-clad Chambertin that The Beach Boys could have written a hit song about. A similar sun-kissed profile as the ’09 but lacking the density. Still this is an agile Chambertin, built to ride the waves rather than make them. A young ’01 perhaps? Reinforces the notion that there are no bad vintages Chez Rousseau.

A huge thanks to the ‘Rousseau Think Tank’ for this once-in-a-lifetime lineup and special evening. Clearly Rousseau’s Chambertin is a wine that more than justifies its reputation but the sheer consistency, over the 4 decades that we tasted, is extraordinary. I can’t think of too many other domaines in Burgundy that have been doing it this well for this long. Magic indeed! 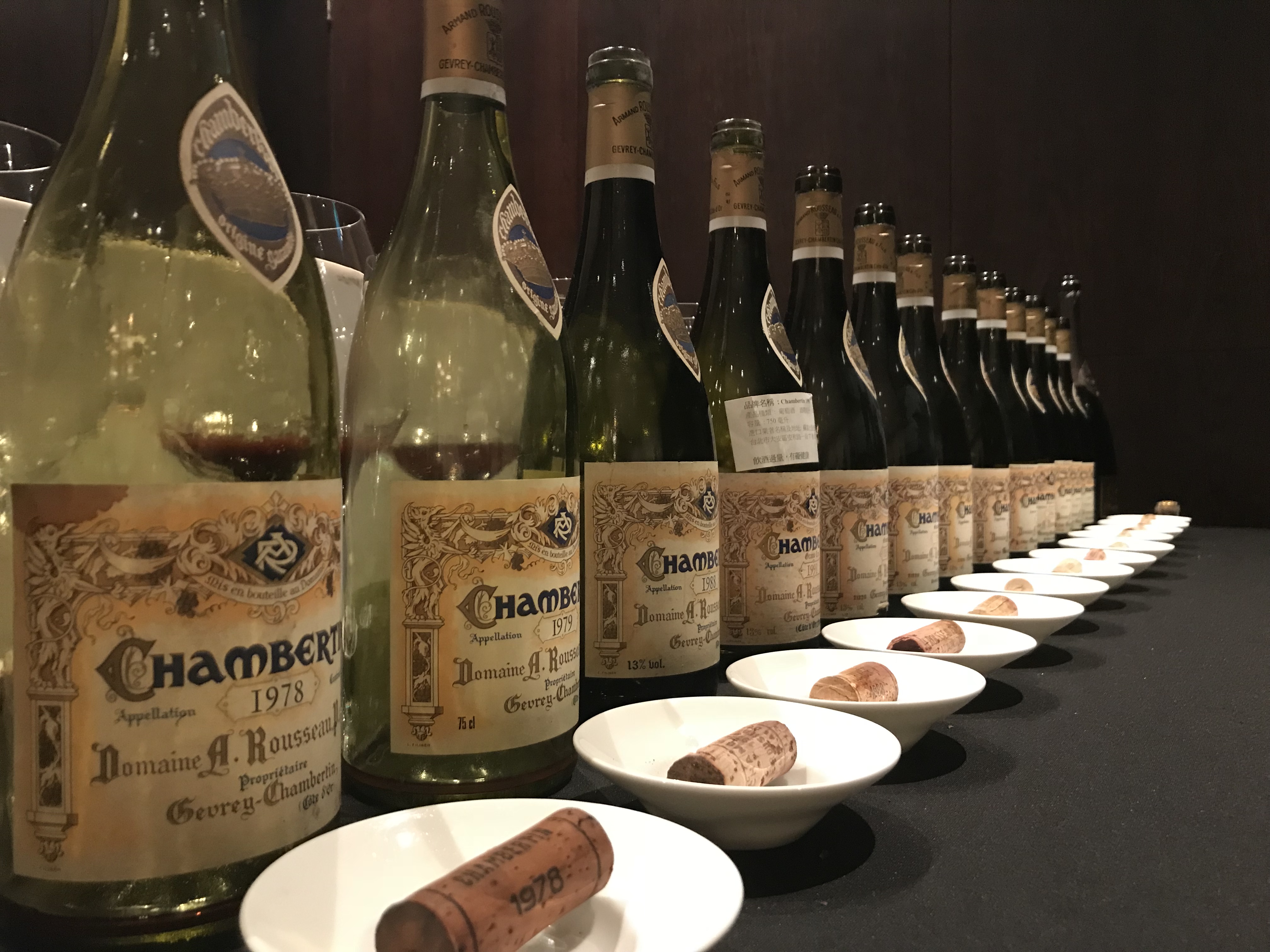 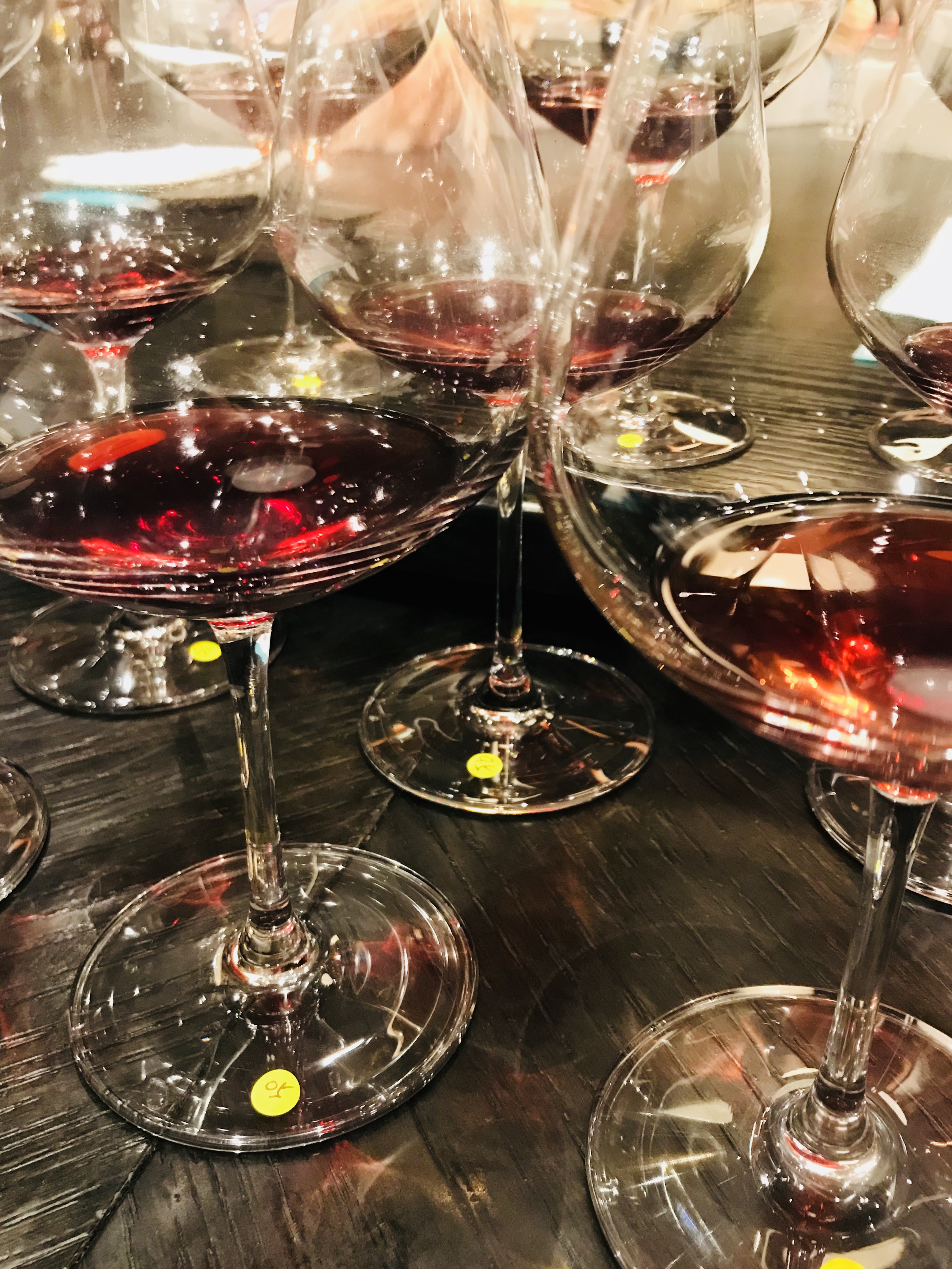