In the 1880s there were hundreds of distilleries in Ireland but most did not bottle their own spirit. Local grocers, who were legally bonded whiskey wholesalers, would arrive at the gates, fill their own casks with spirit, age it, blend it, and sell it. JJ Corry of the port town of Kilrush, County Clare, was a particularly enterprising bonder who experimented with finishes in the barrels he could acquire at the harbour – Bordeaux red wine casks, port pipes etc.

The 20th century saw a massive decline in Irish whiskey sales, particularly affected by prohibition in the US. By 1975 there were only two distilleries left and no whiskey bonders at all. In steps Louise McGuane. She is the first licensed whiskey bonder in Ireland in living memory. She ages new-make spirit in a warehouse on the family farm in Clare, located just six miles from the Atlantic ocean. Unusually for Irish whiskey, the casks are kept in the old-fashioned way, on their sides, raised off a dunnage floor (soil based). The barrels are selected and looked after by one of Ireland’s last master coopers and the whiskies take their name from McGuane’s predecessor and inspiration, JJ Corry. They are curators of casks and individual whiskey flavours - they select every individual cask they own based on its flavour profile and where that sits in their flavour library and know the personality of each cask that they own. As a result, each cask in their rackhouse has a different destiny and occasionally they come across a cask that merits its own unique release, one that has hit its absolute peak of maturation, on this occasion, a 27 year old. 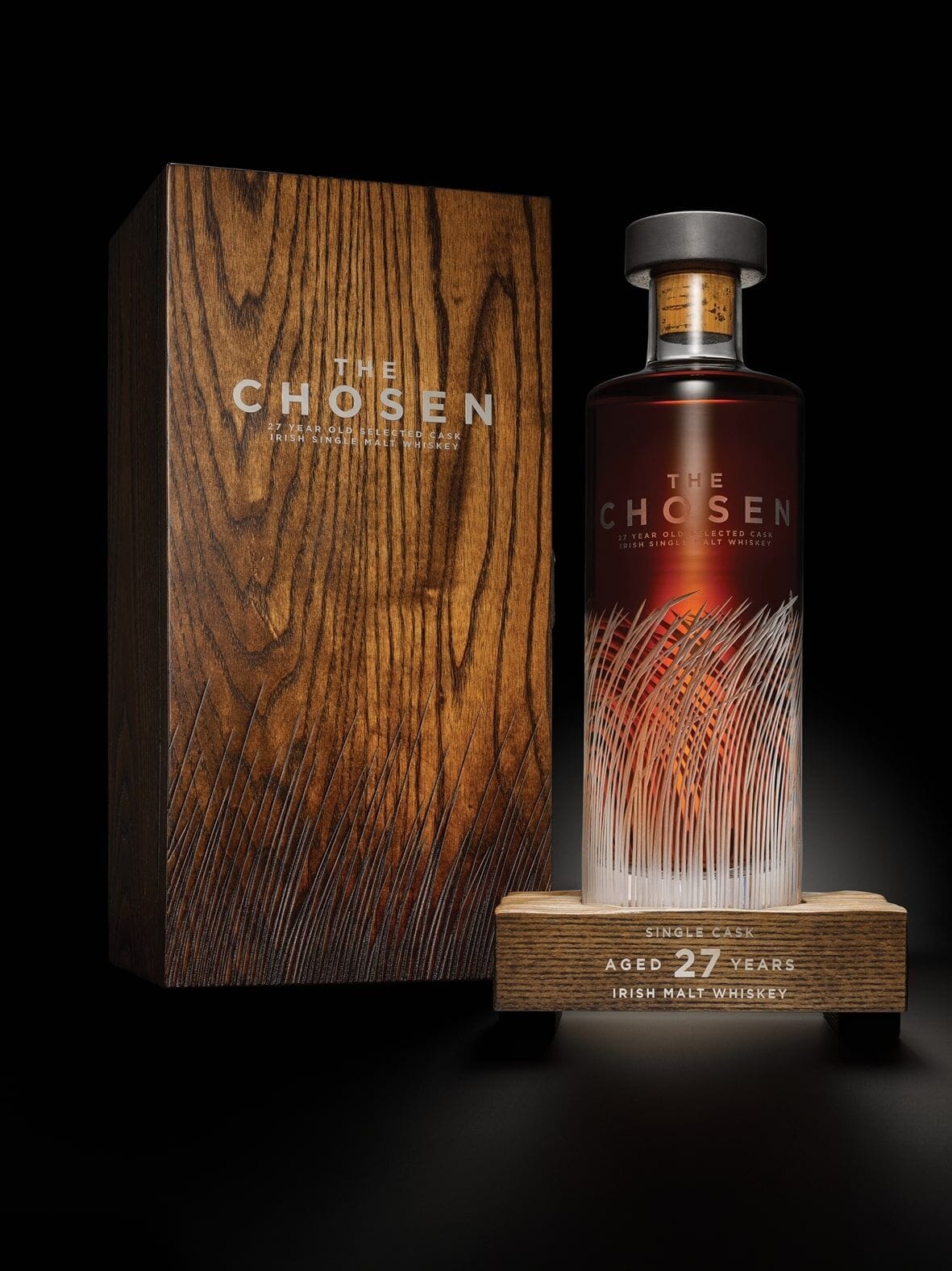 In collaboration with like-minded Irish design houses J. Hill’s Standard and John Galvin Design, The Chosen is a celebration of Irish Whiskey and its rarity and is a true collaboration. The Chosen is a single cask of 27 year old single malt yielding just 100 hand blown crystal decanters individually numbered & hand cut by J.Hill’s Standard in Waterford, the traditional home of Irish Crystal. Every decanter is utterly unique and bears a hand etched depiction of the dune grass which grows along the Atlantic coastline. The decanter sits on a hand carved pedestal, the design of which echoes the ever-changing sands along the beaches on the Wild Atlantic Way where J.J. Corry is based. A wax dipped glass 20 ml vial of is secreted within the pedestal for those that would like to sample the nectar without having to pull the cork on the bottle itself. Each decanter is presented in a hand carved Ashwood cabinet handmade by master craftsman John Galvin. The cabinet is lined in calves’ skin and bears custom made Japanese steel hinges. The exterior of the cabinet is hand carved by John to again echo the dune grass.

Rich and Superbly elegant with toffee, rancio, dried mango, chestnut and polished wood alongside the slightest whisper of smoke. That palate of ripe fruits is complimented by incense and a luscious oily texture. The finish has incredible length. Bottled at cask strength, 52% abv. 70cl. - BI GBP 4,990 IB per bottle - Buy Now!

One of Scotland’s Unsung Heroes

"A regal and heroic Bollinger" - RJ

'The finest vintage to date'

The Greatest Ever Muga ‘Prado Enea’

Your favourite House White is Back

The Pioneer of Rioja

"Challenger to Sassicaia and Ornellaia"

Sun in a Bottle

The World’s Best Calvados - Made Better

Get ready to Rock out the Rose

One of the last vintages of a fine estate

Exclusive Bottling Only at BI

"A very good vintage for this bottling."

"the best buy in the Northern Rhone"

"a Clos Vougeot that will go the distance"

"One of the three best from this vintage"

The Latest Innovation from Krug

"the top of the heap" JD

Without doubt the bargain of the vintage!

Released for H.M. The Queen’s 90th

A dangerously delicious piece of history

The Very Pinnacle of South Africa

"equivalent to many classified growths" RP