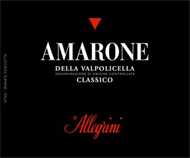 All of Allegrini’s impeccable wines are produced from estate-grown fruit from their 90 hectares of vineyard in the communes of Sant’ Ambrogio and Fumane. Across the range and from vintage to vintage, they have superb fruit, balance, intensity, length, elegance, tipicity and, above all, drinkability. Each wine has winemaker Franco Allegrini’s distinct stamp of quality, but every one has its own distinctive character.

They are among the elite of the world’s best producers of red wines. The family has been growing grapes in Valpolicella for several generations, and the estate in its current form was founded by Giovanni Allegrini. When he died in 1983, it passed to his three children, who ran it together until Walter’s death in July 2003. Franco now looks after the vineyards and is the winemaker, while Marilisa is director of marketing. From the 2007 vintage, Franco sacrificed the Classico status of the Valpolicella and bottled the wine under Stelvin in order to eliminate as much as possible the problems of cork taint and random oxidation.

Their south-east facing vineyards are located in the hills of the Valpolicella Classico region ranging from 150-250 metres above sea level for the Valpolicella to as high as 310m at the top of Podere La Grola where the chalky, white La Poja vineyard stretches across 2.65 hectares. Soils are very varied but mostly chalky, of volcanic origin, especially in La Poja where the soil is 78% chalk. The older vineyards are trained using the pergola Trentina system, planted with about 3000 vines per hectare, whereas the newer ones use the single Guyot system with 5000 plants per hectare. The vines are 28 years old on average.