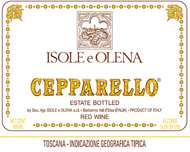 Paolo De Marchi’s vineyards, like those of Giovanni Manetti at Fontodi, are superbly tended. This, more than anything, yields wines of the quality that have kept them both ahead of the chasing pack for the past two decades. The name ‘Isole e Olena’ came about in the 1950s when two adjoining estates, ‘Isole’ and ‘Olena’ were purchased by the De Marchi family and combined to form one.

The history of both estates dates back many hundreds of years, and the earliest documentation of the village of Olena goes as far back as the 12th Century. During the 1950s, the De Marchi family planted new specialised vineyards and expanded the cellars.

The estate has been run by Paolo De Marchi since 1976. Over the years, Paolo has become a leading expert on Sangiovese and travels across the world talking and teaching about this variety. Depite the time these committments demand, he continues to makes the wine at Isole and is now investing a huge amount of energy, with the help of his elder son, Luca, in the old family estate in Piemonte, Proprieta Sperino.

Isole e Olena is situated in the western part of Chianti Classico, just north of the village of Castellina. Its 45 hectares of vineyard are situated between 350-450 metres above sea level, and are planted primarily on galestro soil.