Wines marked with indicates a LiveTrade wine on which we quote firm, live bids at which you can sell to us 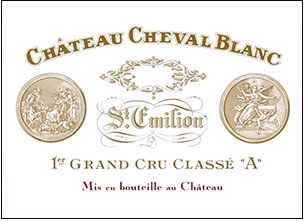 The 2008 Cheval Blanc (55% Merlot and 45% Cabernet Franc) is a winner from this underrated, classic vintage. Notes of forest floor, Asian plum sauce, black currants, sweet cherries and spice are followed by a medium to full-bodied wine with deep fruit, admirable purity, and a long, textured finish. There is not a hard edge to this wine, and in all likelihood, it can be drunk now or cellared for two decades.
93 points – Robert Parker (Wine Advocate #194, May 2011)

In time, the profound 2008 Cheval Blanc will rank alongside this estate's great successes of 2005, 2000, and 1998. A harvest that began at the end of September and concluded October 19 has produced a wine with the 1998's complexity and the power of the 2000. A blend of equal parts Cabernet Franc and Merlot, the dense ruby/purple-tinged 2008 reveals an ethereal nose of subtle menthol intertwined with spring flowers, plums, black currants, and sweet cherries. The wine's seamlessness is enthralling, and, despite the late harvest as well as late malolactics, it is already displaying admirable complexity. This is a beautifully complete, full-bodied Cheval Blanc that dances across the palate with the finesse of a world-class ballerina. Analytically, there is plenty of tannin, but it is totally integrated. While the acids are slightly elevated, they are not noticeable. A tour de force! This wine should evolve for three decades or more. Drink 2009-2039.
95-97 points – Robert Parker (Wine Advocate #182, April 2009)

The 2008 Cheval Blanc has a very precise, mineral-driven bouquet, a mixture of red and black fruit, energetic and incredibly focused, perhaps even more so than Ausone? The palate is medium-bodied with fine tannin though I discerned a patina of oak dragging its heels, waiting to be subsumed. There is great concentration and yet conversely it feels bright and fresh; with aeration evermore nimble and sprightly. Towards the finish there are subtle hints of bay leaf and cedar, the Cabernet Franc taking over the steering wheel from the Merlot. There is a lot going on in this outstanding Cheval Blanc that does not deserve to be in the shadow of the feted 2009 or 2010. (Tasted at BI Wine & Spirit’s annual 10-Year On tasting.)
vinous.com, Feb 2018

I am really impressed with this. It is powerful and rich with so much blueberry, vanilla and spice on the nose and palate. It's full and very spicy, and fruity on the palate, but remains refined and subtle. Rich and polished tannins too. This needs at least five years of bottle age to come around.
– jamessuckling.com, Dec 2010

Quality 945 | Brand 995 | Economics 907 | buzz brand
Quality: The highest Quality score in its peer group for the 2008 vintage, at 945 compared to a peer group average of 814 Brand: Strong restaurant presence, featuring on 40 of the world's top wine lists, including Garibaldi Economics: More traded at auction than its peers, its top 5 vintages having seen 2,982 75cl equivalent bottles traded in the past year Production: Lower yields than its peer group average of 33 hl/ha