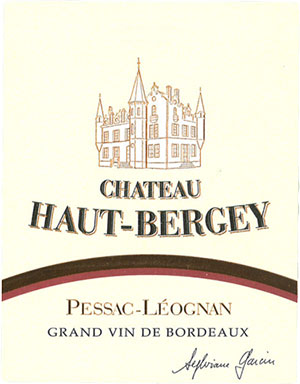 Robert Parker's Wine Advocate 29/02/2012 A blend of just over 50% Cabernet Sauvignon and the balance Merlot (last year I mistakenly wrote that the balance was Cabernet Franc), the opaque ruby/purple-colored 2009 reveals notes of scorched earth/burning embers/charcoal, black currants, ripe cherries and lead pencil shavings. Full-bodied and pure with sweet tannin, this is an under-the-radar, high quality claret to drink over the next 20-25 years. As powerful and rich as the 2000 and 2010, Haut-Bergey’s 2009 is another of the over-achieving, value-priced Bordeaux that are increasingly difficult to find. The estate, which is owned by Helene Garcin (who also owns Clos l’Eglise and Barde-Haut, and makes the cult wine, Branon, from a vineyard adjacent to Haut-Bergey), is situated near Malartic Lagraviere and Domaine de Chevalier. One of the best over-achieving, value-priced wines in Pessac-Leognan, Haut-Bergey's vineyard enjoys a superb location near Malartic-Lagraviere and Domaine de Chevalier. Composed of 60% Cabernet Sauvignon and the rest primarily Cabernet Franc and a dollop of Petit Verdot, the opaque purple-hued 2009 reveals a big, exuberant nose of charcoal, black currants, sweet cherries, and graphite. Dense and full-bodied, with beautiful purity, texture, and length, it should drink well for 20+ years. (Tasted two times.) P.S. I also tasted the brilliant 2000 Haut-Bergey in March, 2010, and it was still a youngster in terms of its development (92-94)

Tasted at Clos l'Eglise. This has a rather pinched nose, blackberry, oyster shell, briary and crushed stones; very fresh and delineated, not powerful, but opening nicely with aeration. The palate is medium-bodied, grainy tannins, quite meaty and grainy, some savoury notes towards the finish. Understated, approachable, nice sous-bois elements on the finish. Fine. Tasted April 2010.