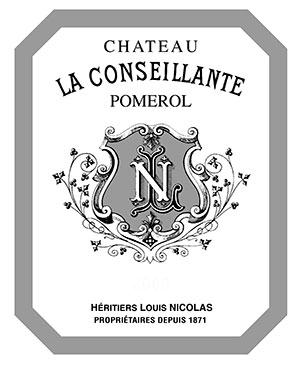 Robert Parker's Wine Advocate 29/06/2010 La Conseillante made an excellent wine in 2001, another great one in 2005, and the estate hit home runs in both 2008 and, above all, in 2009. In fact, the latter vintage may well end up being the modern-day reference point for La Conseillante. Nevertheless, there’s a lot to be said for this 2000. An elegant, gentle style that is never a blockbuster, the 2000 La Conseillante has a deep ruby/plum/purple color and an unbelievably expressive nose of sweet kirsch liqueur intermixed with raspberries, incense, toast, and licorice. Full-bodied yet ethereal in the sense that it seems to combine power along with eloquence and delicacy, this is a beautifully pure wine that has just hit its plateau of full maturity, although ideally I think it would benefit strongly from another 4-5 years of bottle age and drink well for two to three decades. Drink 2008-2030
-Parker's Wine Buyer's Guide No 7

A tremendous effort, and certainly the best La Conseillante since the marvelous duo of 1989 and 1990, this deep ruby/plum/purple-colored wine offers up notes of blackberries and kirsch liqueur intermixed with licorice, incense, spice box, and copious amounts of toasty oak. It is a relatively powerful effort for La Conseillante, with more tannin and structure than most vintages possess. As the wine sits in the glass, black raspberries, blueberries, smoke along with floral notes emerge. There is tremendous purity, medium to full body, great precision and concentration. Unlike most vintages of La Conseillante, the 2000 will require patience. A bottle kept open refused to oxidize until day six! Anticipated maturity: 2008-2025. (96)