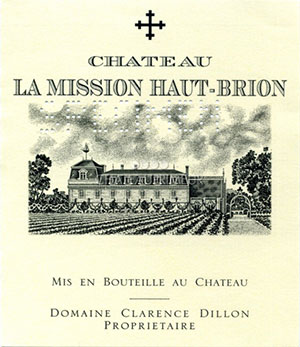 100pts -The 2009 was not part of this vertical tasting, so I am repeating the tasting note published in issue #199 of The Wine Advocate from a tasting done in January, 2012.

A candidate for the wine of the vintage, the 2009 La Mission-Haut-Brion stood out as one of the most exceptional young wines I had ever tasted from barrel, and its greatness has been confirmed in the bottle. A remarkable effort from the Dillon family, this is another large-scaled La Mission that tips the scales at 15% alcohol. A blend of equal parts Cabernet Sauvignon and Merlot (47% of each) and the rest Cabernet Franc, it exhibits an opaque purple color as well as a magnificent bouquet of truffles, scorched earth, blackberry and blueberry liqueur, subtle smoke and spring flowers. The wine’s remarkable concentration offers up an unctuous/viscous texture, a skyscraper-like mouthfeel, sweet, sumptuous, nearly over-the-top flavors and massive density. Perhaps a once-in-a-lifetime La Mission-Haut-Brion, the 2009 will take its place alongside the many great wines made here since the early 1920s. The good news is that there are nearly 6,000 cases of the 2009. It should last for 50-75+ years. Given the wine’s unctuosity and sweetness of the tannin, I would have no problem drinking it in about 5-6 years. The final blend was 47% Merlot, 47% Cabernet Sauvignon and 6% Cabernet Franc.

The 2009 La Mission Haut-Brion has a wonderful, extravagant bouquet with a slight medicinal note (not apparent on the bottle poured blind the following week) infusing the precocious red fruit, all beautifully defined with star anise and bayleaf developing. The palate is medium-bodied with supple tannin, very well judged acidity, precocious in style with a long finish that maintains that medicinal leitmotif. Wonderful. Tasted at BI Wines & Spirits' Ten Year On tasting. - vinous.com, March 2019

Dark, cool and sleek, this is a very sophisticated wine with great structure and polished tannins that's just beginning to give its best. The cassis and blackberry fruit is brightest on the long finish and that suggests this has great aging potential. Drink or hold. (Horizontal Tasting, London, 2019) - Stuart Pigott, jamessuckling.com, March 2019