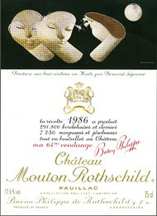 After stumbling over some wines I thought were high class Bordeaux, I nailed this wine in one of the blind tastings for this article. In most tastings where a great Bordeaux is inserted with California Cabernets, the Bordeaux comes across as drier, more austere, and not nearly as rich and concentrated (California wines are inevitably fruitier and more massive). To put it mildly, the 1986 Mouton-Rothschild held its own (and then some), in a flight that included the Caymus Special Selection, Stags Leap Wine Cellars Cask 23, Dunn Howell Mountain, and Joseph Phelps Eisele Vineyard. Clearly the youngest looking, most opaque and concentrated wine of the group, it tastes as if it has not budged in development since I first tasted it out of barrel in March, 1987. An enormously concentrated, massive Mouton-Rothschild, comparable in quality, but not style, to the 1982, 1959, and 1945, this impeccably made wine is still in its infancy. Interestingly, when I was in Bordeaux several years ago, I had this wine served to me blind from a magnum that had been opened and decanted 48 hours previously. Even then, it still tasted like a barrel sample! I suspect the 1986 Mouton-Rothschild requires a minimum of 15-20 more years of cellaring; it has the potential to last for 50-100 years! Given the outrageously high prices being fetched by so many of the great 1982s and 1990s (and lest I forget, the 1995 Bordeaux futures), it appears this wine might still be one of the "relative bargains" in the fine wine marketplace. I wonder how many readers will be in shape to drink it when it does finally reach full maturity?
The tasting notes for this section are from two single blind tastings, one conducted in May, 1996, in California, and the other in June, 1996, in Baltimore.

Deep garnet-black colour. An incredible array of aromas on the nose: blackberry, black cherry, tobacco, espresso, leather, black olive and loam. The palate is absolutely seamless from first impression to finish, effortlessly building layers of complexity in the mouth and leading to a very long, earth and spice finish. I can’t see how this could possibly be improvement so have no alternative but concede perfection. Drink now to 2045+. Tasted March 2009.

The 1986 Mouton-Rothschild is a blend of 80% Cabernet Sauvignon, 10% Merlot, 8% Cabernet Franc and 2% Petit Verdot that was picked from 2 October until 16 October. Winemaker Philippe Dhalluin, who was not working at the property back then, told me that the pH was fairly low at 3.54 when it is usually around 3.75, due to the natural tartaric acid in the vines. It has a powerful and intense bouquet as always: exemplary graphite and cedar scents, a touch of black pepper and incense. It seems to unfurl in the glass, like a motor revving its engine. The palate is beautifully balanced with its trademark firm tannic structure, a Mouton-Rothschild with backbone and masculinity. Layers of black fruit intermingling with mint and graphite, a hint of licorice emanating from the Merlot, gently fanning out and my God, it is incredibly long. It is not like the 1985 Mouton-Rothschild that is so fleshy and generous. This is serious, aristocratic Mouton, a true vin de garde and yes, I do think drinkers will have to wait until it reaches its true peak. Sometimes that's just the way it is. Tasted September 2016.

This is finally coming around with such fine tannins and beautiful fruit after all these years. Full and balanced. Historical. And so long. Beautiful. Fresh and bright.

Philippe Dhalluin served the 1986 Mouton Rothschild to wrap up our vertical. The 1986 remains one of my favorite Moutons. A dark, powerful wine, the 1986 is endowed with a vertical sense of structure that is a marvel to behold. Dark stone fruit, smoke, graphite, mocha, soy and licorice are fused together in a marvelously intense, deep Mouton that promises to drink well for another few decades. Tonight, the 1986 is absolutely stunning. The blend is 80% Cabernet Sauvignon, 10% Merlot, 8% Cabernet Franc and 2% Petit Verdot. Harvest started on October 2nd and wrapped up on the 16th.

Quality 996 | Brand 999 | Economics 968 | buzz brand, investment staple
Quality: Predicted life of 27 years, one of the longest drinking windows in its peer group for the 1986 vintage, which averages 15 years Brand: #1 Most sought after wine globally, with 93,283 searches on Wine-Searcher per month Economics: #1 most active wine at auction, its top 5 vintages having seen 5,632 75cl equivalent bottles traded in the past year Production: Higher production than its peer group average of 151,058 bottles