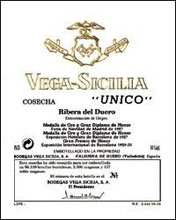 Vega Sicilia’s 2003 Unico, mainly Tempranillo with a balancing 8% of Cabernet Sauvignon, was aged in wood for nearly seven years before being bottled, starting with 15 months in large oak vats, followed by 25 months in new barriques, before being transferred to used ones for another 17 months and ending its elevage with a further 22 months in those large wood vats again. As I uncork the bottle, the aroma reminds me of a classical Tempranillo, with some dill notes from the American oak and a minty hint from the Cabernet. It actually makes me think of traditional Rioja, believe it or not. The wine doesn’t show the heat of the vintage, and manages to transmit a general sensation of balance and finesse that is quite remarkable for the characteristics of the year. The aim here was to avoid the confited and raisiny notes of the fruit and the spirity character so common in that vintage. It starts off slightly lactic, with notes of cafe au lait, coconut and cola. With a bit of time, it turns more flowery and shows more red fruit. It is very aromatic, with plenty dry herbs, thyme and rosemary, even pine nuts, a bit of resin and some cured meat, and overall has a very complex nose. The mouth is a little more transparent toward the heat of the vintage, it is powerful and full-bodied, but manages to keep freshness. The minty note is there, with some hints of chalk that make it very tasty. It feels briary and opulent. A success over the vintage conditions, it already shows some signs of complexity, which points at an approachable Unico. Even though it can be drunk now, it will get more polished and integrated with a few years in bottle. 76,050 bottles and 2,616 magnums were filled (on the low-ish side for Unico), but the magnums will be sold later; they are currently offering 2000 in magnum and 1999 in double-magnum. Anticipated maturity: 2013-2023.
-Luis Gutierrez, Wine Advocate #207 Jun 2013